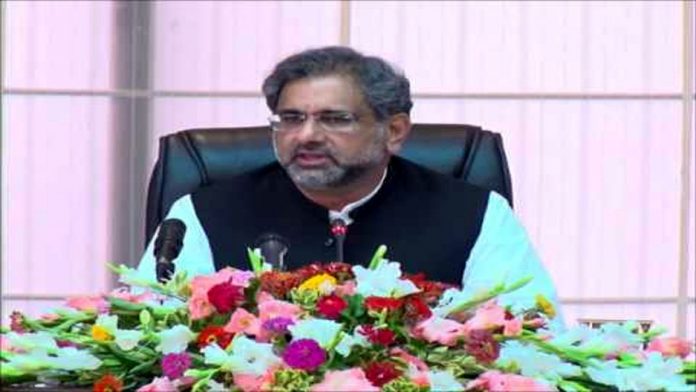 ISLAMABAD: Prime Minister Shahid Khaqan Abbasi Tuesday expressing complete solidarity with the people of Kashmir fighting for their right of self-determination, saying Indian security forces were indiscriminately killing innocent and unarmed civilians in the occupied Kashmir.
The prime minister stated this while chairing 55th session of Azad Jammu and Kashmir Council.
The Council offered Fateha for the martyrs of unprovoked Indian firing across the Line of Control (LoC) and for the victims of Indian brutalities in occupied Kashmir.
The prime minister apprised the Council of his participation in the extraordinary OIC (Organization of the Islamic Cooperation) Summit last week in Istanbul where he highlighted the plight of the people of Indian occupied Kashmir (IoK) along with the Palestine issue.
He said whatever was happening in IOK was unprecedented, where unarmed civilians were being targeted.
The prime minister also informed about his meeting with the United Nations Secretary General during the Boao Forum wherein he informed the Secretary General that the Indian security forces were perpetrating the worst form of terrorism in the occupied Kashmir.
Prime Minister Abbasi said in the wake of recent killings in the Indian occupied Kashmir, he visited AJK and addressed the AJK Legislative Assembly to express solidarity with the Kashmiri brethren.
The prime minister reaffirmed the moral, political and diplomatic support to the Kashmir cause and settlement of the Kashmir dispute in accordance with the UNSC resolutions and according to the wishes and aspirations of the Kashmiri people. – APP