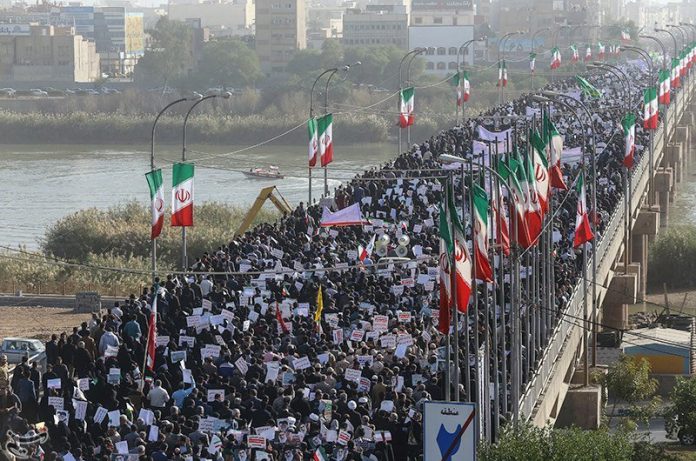 DUBAI: Iran’s Revolutionary Guard said on Sunday the country’s people and security forces had defeated unrest fomented by foreign enemies, as parliament and security officials met to discuss the boldest challenge to the clerical establishment since 2009.
There has been more than a week of unrest in Iran in which 22 people have died and more than 1,000 arrested, according to Iranian officials. The protests spread to more than 80 cities and rural towns as thousands of young and working-class Iranians expressed their anger at graft, unemployment and a deepening gap between rich and poor.
“Iran’s revolutionary people along with tens of thousands of Basij forces, police and the Intelligence Ministry have broken down the chain (of unrest),” the Guards said in a statement on their Sepahnews website. The Guards said the unrest had been “created … by the United States, Britain, the Zionist regime (Israel), Saudi Arabia, the hypocrites (Mujahideen) and monarchists.”
Parliament met behind closed doors on Sunday to discuss the week of unrest with the ministers of interior and intelligence, Iran’s police chief and the deputy commander of the elite Revolutionary Guards, state television said.
Residents contacted by Reuters in various cities have said the protests had subsided after the government intensified a crackdown by dispatching Revolutionary Guards forces to several provinces.
Late on Saturday, videos on social media showed a heavy police presence in cities, including Khorramabad in southwestern Iran where on Wednesday evening social media posts showed protesters throwing stones at riot police.
As protests have ebbed, the government has lifted restrictions it imposed on Instagram, one of the social media tools used to mobilize protesters. But access to a more widely used messaging app, Telegram, was still blocked, suggesting authorities remained uneasy about the possibility of further protests.
Meanwhile, thousands of government supporters staged rallies in a backlash against the biggest anti-government protests since widespread unrest in 2009 over alleged election fraud.
State television showed live pictures of rallies in several cities, including central Shahr-e Kord where hundreds, many clutching umbrellas, had gathered despite heavy snowfall.
“Death to America”, “Death to Israel”, “Death to Britain” “Death to seditionists”, the demonstrators chanted.
The anti-government protests have attracted largely young people and workers as well as members of the educated middle-class that formed the backbone of a pro-reform revolt almost a decade ago.
A police spokesman said most of those arrested were “duped” into joining the unrest and had been freed on bail, the state news agency IRNA reported. “But, the leaders of the unrest are held by the judiciary in prison.”
Several parliament members and university officials have expressed concern over the fate of students arrested during the protests. Tehran University Vice-President Majid Sarsangi has said the university had set up a committee to track them.
Parliament spokesman Behrouz Nemati said on Sunday, MPs had asked security officials for a report about the detained students during the closed session.
“One of the issues addressed by deputies and the parliament speaker was that of detained students, and it was decided that the Intelligence Ministry would vigorously pursue this and submit a report by next week,” said Nemati, quoted by IRNA.
A member of parliament said earlier about 90 students were detained, 10 of whom were still not accounted for.
Iran has several parallel security bodies and residents say arrests are often not immediately announced.
Videos that appeared on social media in recent days showed relatives of detainees gathering outside prisons seeking information about the fate of their loved ones.
The Revolutionary Guards and their affiliated Basij militia suppressed unrest in 2009, in which dozens of pro-reform Iranians were killed. – Reuters