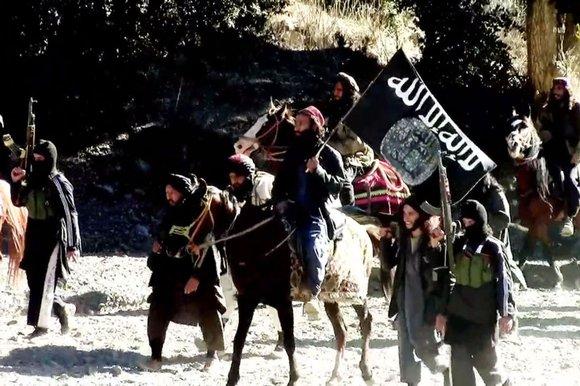 KABUL: The Islamic State of Iraq and Syria (ISIS) loyalists aiming to gain a foothold in Afghanistan have vowed to eliminate the Durand Line in a bid to unite and pave the way for the Muslims divided by the line.
A spokesman for the terror group’s self-proclaimed Khurasan province said the Islamic State eye to destroy the borders similar as they did between Iraq and Syria.
The porous Durand Line has also been a source of tension between Afghanistan and Pakistan where numerous cross-border attacks have been carried out besides the bordering regions have long been and continues to be the main shelter of the terror groups.
In the meantime, affiliates of the terror group have doubled efforts to encourage the dissident high level Taliban commanders to join the ISIS group in a bid to further gain foothold in the country.
The spokesman for the terror group said a delegation of prominent scholars have been sent by the group’s Khurasan province chief to Uruzgan province to meet with the senior Taliban leader Mullah Mansoor Dadullah.
This comes as the group claimed yesterday that Mullah Dadullah was rescued from an offensive by the Taliban militants involving 2,100 fighters in southern Zabul province.
He said at least 230 ISIS fighters were deployed to Zabul from western Farah province to engage the Taliban militants and rescue Mullah Dadullah.
He also claimed that Mullah Abdul Manan, the brother of the Taliban founder Mullah Mohammad Omar, prefers to join the ISIS group rather than pledging allegiance to the newly appointed Taliban leader Mullah Akhtar Mansoor. …Agencies