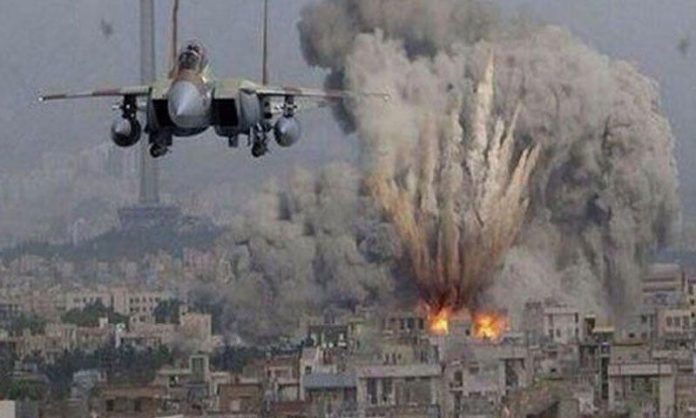 JERUSALEM: Israeli jets struck 25 Islamist Hamas targets in the Gaza Strip in the early hours of Wednesday after militants launched rockets and mortar shells at Israeli territory, the military said.
Two Hamas security men were lightly hurt in one air strike in the southern Gaza Strip, residents said. No casualties were reported in Israel after one of the most intense recent barrages of militant rocket launches and Israeli air strikes.
Air raid sirens and Israeli phone warning applications sounded throughout the pre-dawn hours.
The military counted 30 rockets and mortar shells fired at Israeli territory and said its Iron Dome anti-missile shield intercepted seven rockets.
Since its last war with Gaza’s dominant Hamas Islamists in 2014, Israel has stepped up efforts to prevent cross-border attacks, improving rocket interceptors and investing in technologies for detecting and destroying guerrilla tunnels.
In recent weeks, Palestinians have sent kites dangling coal embers or burning rags across the Gaza border to set fire to arid farmland and forests, others have carried small explosive devices in a new tactic that has caused extensive damage.
At least 127 Palestinians have been killed by Israeli troops during mass demonstrations along the Gaza border since March 30 and the men sending the kites over the fence believe they have found an effective new weapon.
Israel’s deadly tactics in confronting the weekly Friday protests have drawn international condemnation.
Palestinians say the protests are an outpouring of rage by people demanding the right to return to homes their families fled or were driven from following the founding of Israel 70 years ago.
Israel says the demonstrations are organized by the Islamist group Hamas that controls the Gaza Strip and denies Israel’s right to exist. Israel says Hamas has intentionally provoked the violence, a charge Hamas denies.
Around two million people live in Gaza, most of them the stateless descendants of refugees from what is now Israel. The territory has been controlled by Hamas for more than a decade, during which it has fought three wars against Israel.
Israel and Egypt maintain a blockade of the strip, citing security reasons, which has caused an economic crisis and collapse in living standards there over the past decade. – Reuters