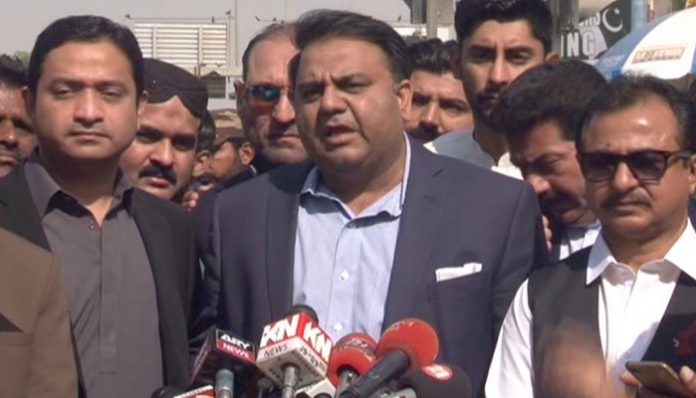 KARACHI: Information Minister Chaudhary Fawad Hussain has said the government will soon table a Journalists Protection Bill in the National Assembly to ensure all possible security for working journalists. Addressing the Journalism Excellence Award Ceremony in Karachi on Tuesday, he said health cards will also be issued to journalists, enabling them to avail medical facilities upto five lac rupees in case of any emergency.
The Minister said the government will also ensure utmost transparency in its Advertizing Policy and place all the record of adds given to various media houses on the PID website.
Earlier, talking to newsmen in Karachi today, Information Minister said it is high time to bring a positive political change in Sindh to protect the basic rights of people in the province.
He said the funds allocated for development of the province are being plundered and laundered abroad by the Omni and Zardari groups through the courtesy of sitting Chief Minister Syed Murad Ali Shah.
The Minister advised the Sindh Chief Minister to resign from his office, allowing the provincial assembly and all the political forces that have sincere feelings for the people of Sindh to choose a new chief minister of their choice. The information Minister regretted that Murad Ali Shah led Sindh administration has failed to contribute its share in the development of erstwhile FATA through NFC Award whilst all the other three provinces came forward for this cause.
Replying to a question,Choudhary Fawad said that an English daily published a fake story about so called PTI accounts which was rejected by the State Bank of Pakistan. He said the government will take all necessary measures to counter publishing of such fake news.
Information Minister Fawad Chaudhary has categorically stated that the process of accountability will move forward regardless of opposition’s hue and cry.
The Information Minister said all the institutions are working independently and they are free to hold investigation against any individual.
Fawad Chaudhary termed today’s sitting of the opposition parties at the parliament house as the meeting of the ‘alliance for restoration of corruption.’
He said the opposition parties have totally lost public sympathies.
He regretted that the opposition leaders always make hue and cry over their corruption cases but never talk about the problems faced by the country and the people in the parliament house.
The Information Minister said that National Accountability Bureau should arrest PPP Co Chairperson Asif Ali Zardari, Faryal Talpur and Sindh Chief Minister Murad Ali Shah in fake accounts case in order to carry forward the investigation.
He said the anti graft body has been given two months by the Supreme Court to complete investigation into the case.