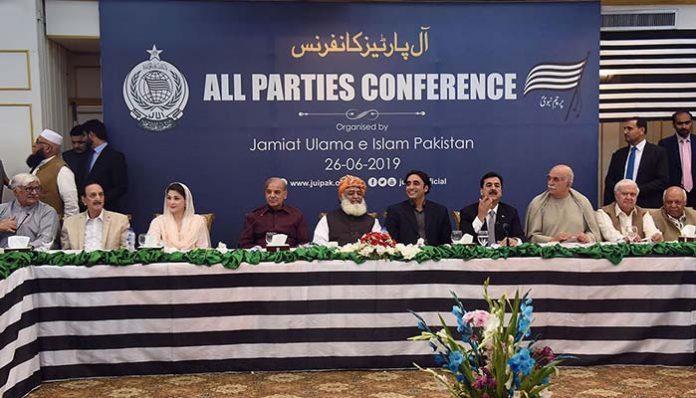 ISLAMABAD: Jamiat Ulema-i-Islam (JUI-F) President Maulana Fazlur Rehman has convened all parties’ leaders on Tuesday (tomorrow) to hold consultations regarding the nomination of a candidate for the election of ‘Rahbar Committee’ chairman as all the members for the committee has been finalised on Monday (today).
According to reports, Pakistan People’s Party (PPP) has nominated Yousaf Raza Gilani and Nayyar Bukhari as a member for Rahbar Committee while Shahid Khaqan Abbasi and Ahsan Iqbal will represent Pakistan Muslim League-Nawaz (PML-N).
Awami National Party (ANP) has named Mian Iftikhar Hussain while JUI-F nominated Akram Khan Durrani for the committee.
Pakhtunkhwa Milli Awami Party and Jamiat Ulema-e-Pakistan have nominated Usman Khan Kakkar and Awais Noorani respectively to represent their parties in the meetings of Rahbar Committee.
Similarly, other parties including Jamiat Ahle Hadess, National Party and Qaumi Watan Party have also submitted the names of members for Rahbar Committee.
The PML-N has already suggested Maulana Fazlur Rehman to head the committee while PPP struggling to make the chairman from their party.
The Rahbar Committee meeting will be called after the election of chairman.