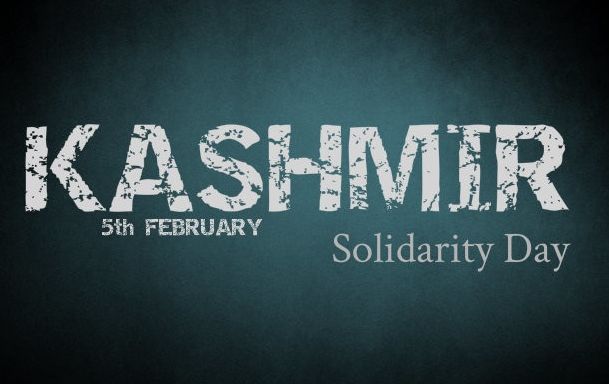 ISLAMABAD: Kashmir Solidarity Day is being observed today to express whole hearted support of the Pakistani nation to just struggle of Kashmiri people for their inalienable right to self-determination under UN resolutions.
One minute silence was observed at 10.00 am to pay homage to the martyrs of the liberation struggle of Occupied Kashmir.
President Arif Alvi arrived in Muzaffarabad this morning to address session of the AJK Legislative Assembly.
He was presented Guard of honour on the occasion.
President Alvi will also participate in a function in Islamabad in the evening.
Human chains formed at Kohala, Mangla, Holar and Azad Pattan points linking Pakistan and Azad Kashmir.
A key ceremony to mark the Kashmir Solidarity Day was held at D-Chowk in Islamabad today.
It was attended by Minister for Kashmir Affairs Ali Amin Gandapur, parliamentarians, students and people from various walks of life.
Addressing the ceremony, the Minister for Kashmir Affairs said people and government of Pakistan fully stand with their Kashmiri brethren in their just struggle for freedom.
Ali Amin Gandapur said international community should take note of the barbarities committed by Indian troops on innocent Kashmiris for raising their voice of liberation.
On the occasion, a human chain was formed by the participants to express solidarity with their Kashmiri brethren.
In Azad Jammu and Kashmir, people will observe Kashmir Solidarity Day with a renewed pledge to seek a solution to the longstanding dispute in accordance with the UN resolutions and aspirations of the Kashmiri people. The day will dawn with special prayers for the martyrs and success of the freedom movement.
Human Chains will be formed at Kohala, BararKot and other points linking Pakistan and Azad Kashmir.
One-minute silence will be observed at 10.00 a.m. to honor the Kashmiri martyrs.
In Muzaffarabad, the main event of the day will be the special session of Azad Jammu and Kashmir Legislative Assembly which will be addressed by President of Pakistan Dr. Arif Alvi.
Food would be distributed among the Kashmiri refugees in their camps at Muzaffarabd, Bagh, Kotli and Mirpur.
Public rallies, walks, seminars have also been organized to draw world attention towards the plight of oppressed Kashmiri people in occupied territory. Azad Kashmir Radio Muzaffarabad has arranged daylong programmes featuring different dimensions of the Kashmir dispute, freedom struggle, human rights abuse by India in Occupied Kashmir and interviews of important personalities.
In Khyber Pakhtunkhwa, the main function in connection with the Kashmir solidarity day will be held in Peshawar.
The speakers will pinpoint the atrocities being perpetrated by Indian troops on the innocent Kashmiris in occupied territory.
Meanwhile, rallies will be taken out from Hashtnagri, Gulbahar and Chamkani to mark the day.
Similarly, a photographic exhibition has also been arranged to highlight the Indian atrocities.
Special functions will also be held in all educational institutions across the province to express solidarity with the innocent Kashmiri people who are struggling for their right to self-determination.
Like other parts of the country, Kashmir Solidarity Day will also be observed in Balochistan. In this connection, a number of programmes have been chalked out to mark the day and express solidarity with the Kashmiri brethren.
In Gilgit Baltistan, protest rallies will be carried out today in connection with Kashmir Solidarity Day.
In Gilgit, the main protest rally will be taken out from High School No1.
Speakers on the occasion will condemn atrocities being perpetrated on innocent Kashmiries who are struggling for their inalienable right to self-determination.
Force Commander Northern Areas Major General Ahsan Memhood will also lead a car rally from Lalik Jan Stadium.
Kashmir Solidrity Day will also be observed in Sindh province like other parts of the country.
Rallies will be carried out in all cities including metropolitan Karachi to highlight struggle of Kashmiris.