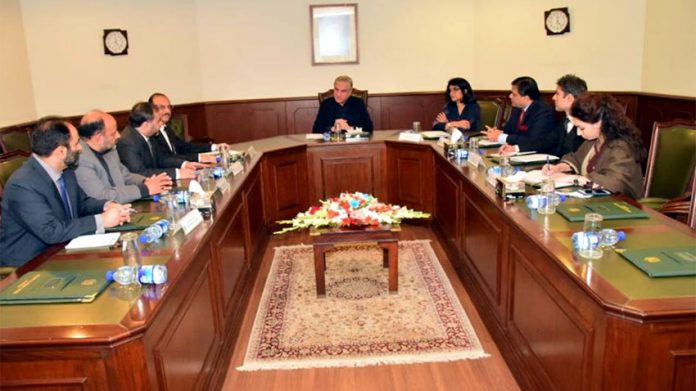 ISLAMABAD: Foreign Minister Shah Mahmood Qureshi says “Kashmir Solidarity Day” will be observed on 5th of the next month in a befitting manner to highlight the Kashmir issue and express solidarity with the people of Occupied Kashmir.
This he said during a meeting with a four-member delegation of Kashmiri leaders in Islamabad on Wednesday.
He said Pakistan will continue its political, moral and diplomatic support to the Kashmiri brethren in achieving their right to self-determination and will not let the sacrifices of the armless Kashmiris specially the innocent women and children to go in vain.
The Foreign Minister said the human rights situation in Occupied Kashmir is further deteriorating with unabated use of force by India against civilians.
He, however, said that Pakistan will continue to raise the Kashmir issue at the International fora, exposing the Indian atrocities.
Shah Mahmood Qureshi said Pakistan’s view point on Kashmir issue has also been vindicated by the United Nations Human Rights Commissioner’s Report and other international reports on the matter.
The Minister said Pakistan also reiterated its demand to the UN General Assembly President María Fernanda Espinosa Garcés during her recent visit to Islamabad that Jammu and Kashmir issue must be resolved under the relevant UN Security Council resolutions
The delegation thanked the foreign minister for raising the Kashmir issue at all the international forums including the United Nations to draw the attention of world nations towards this important issue.