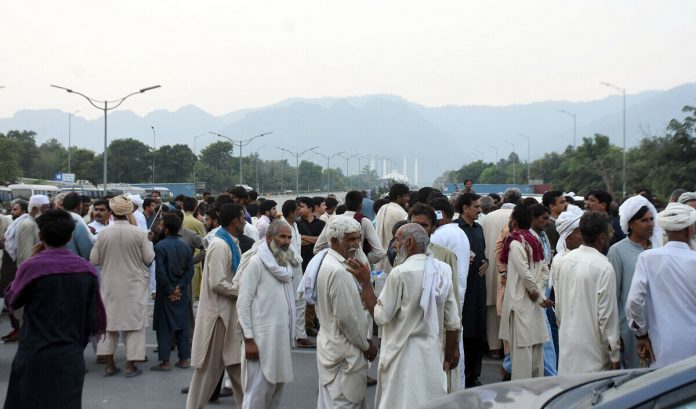 ISLAMABAD: Farmers led by the Kissan Ittehad staging a protest sit-in in Islamabad have threatened the government of entering into red zone and march toward the parliament, if their demands were not fulfilled.

The electricity tariff for agricultural tube wells, lowering fertiliser prices, and bringing the wheat support price to be comparable to that of Sindh are among the main demands of the Kisan Ittehad.

Reacting to thier demands, Interior Minister Rana Sanaullah said that the committee is working to reduce the bills of tube wells.

Farmers said that fertilizer in Punjab is being sold on the black market. The provincial government is diverting canal water to big landlords and their own people.

They said that a poor farmer cannot afford to pay the heavy bills of agricultural tube wells.

Chairman Kisan Ittehad Khalid Batth warned if their issues are resolved, they will be forced to take harsh steps.

I request the federal and provincial government to make the rates of fertilizer and wheat equal in all the provinces, he said.

The farmers have also threatened to expand the scope of protest.

The protestors have warned that they will call for strikes in all the districts if their demands are not met.

Federal Interior Minister Rana Sanaullah has that the committee constituted by the federal cabinet is working to reduce the electricity bills of agricultural tube wells. They will reconsider the farmers’ demand, the minister said.