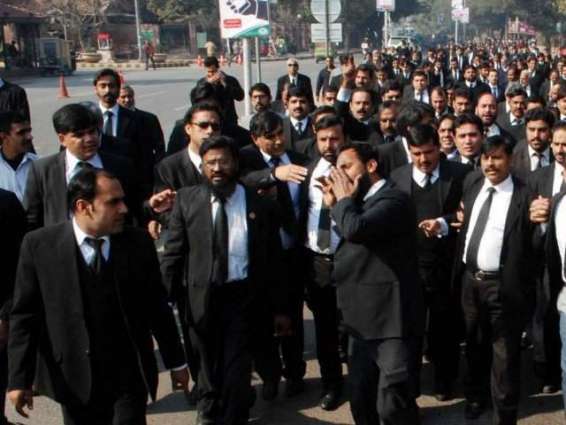 PESHAWAR: The Khyber Pakhtunkhwa Bar Council has announced that it would observe a province-wide strike on Thursday against the statement of the ISPR chief on the special court’s verdict in a high treason case against former military dictator Pervez Musharraf.
According to a statement issued Wednesday, the council condemned Major General Asif Ghafoor’s “attitude and expressions”.
A special court on Tuesday handed the former military dictator death sentence under Article 6 of the constitution in the high treason case.
Following the court’s verdict, the ISPR DG released a statement saying that “due legal process” was not followed in the case against Musharraf. The military’s media wing said the special court decision was received “with lot of pain and anguish”.
“An ex-Army Chief, Chairman Joint Chief of Staff Committee and President of Pakistan, who has served the country for over 40 years, fought wars for the defense of the country can surely never be a traitor,” the ISPR statement said.
“Armed Forces of Pakistan expect that justice will be dispensed in line with Constitution of Islamic Republic of Pakistan.”
The KP Bar Council said the ISPR DG’s remarks were a “clear cut violation” of the legal and constitutional provisions. It accused Major General Ghafoor of committing “contempt of superior judiciary”.
“The manner and the way in which the judgment of the Special Court has been criticized by the DG ISPR clearly gives the impression that in Pakistan, all the institutions are subservient to follow the dictation of the Arm[ed] force,” the statement read.