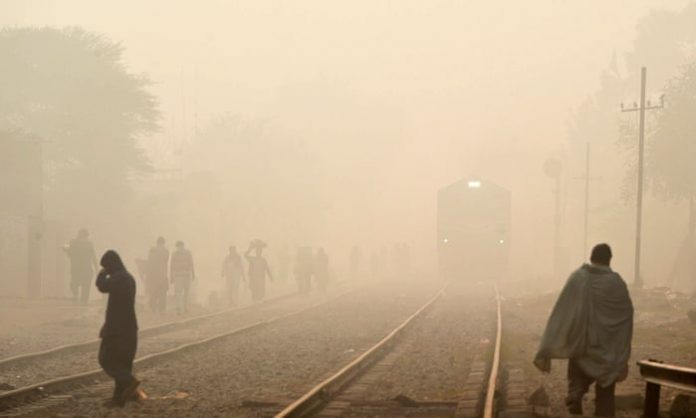 LAHORE: The Air Quality Index (AQI) Monday reached 289 in Lahore, which put the city on the list of the most polluted cities in the world. Smog has engulfed the provincial metropolis, blurring vision and causing serious health problems for citizens.

Sources in the EPA revealed that a number of furnaces in the northern side of Lahore were operating at night and used sub-standard fuel and material, such as rubber tyres, plastic and other materials, which contributed to the rising air pollution.

Increase in fine particles (PM 2.5) were the main cause of reduced visibility (haze) in Lahore on Monday and several citizens on the streets interviewed by the scribe claimed they were feeling irritation in their eyes, difficulty in breathing and throat irritation followed by cough.

As per the report released by EPD’s spokesperson, the AQI level in the city on Monday was 289, which as per their standards comes under “moderately polluted”. As per USA standards, an AQI level between 201-300 is “very unhealthy” and health warnings of emergency conditions should be issued because the entire population is more likely to be affected.

The EPA has only one mobile van, which can monitor a level of PM 2.5, while rest of its eight fixed stations in the metropolis are either non-functional or not able to detect PM 2.5.

On the other hand, Lahore District Officer (Environment) Ali Ejaz claimed that smog was coming from India due to massive crop burning. On Monday, the AQI of Amritsar in India was 189, while Lahore’s AQI was 289, which didn’t match with his statement.

Over a question about action against polluting industries, he said EPA was taking regular action against industries. He said that out of over 300 steel furnaces, 60% were already closed down or shifted outside Lahore.

He said six industries were inspected on Monday, out of which three were sealed over violation of SOPs. He further said that 166 vehicles were checked, out of which 44 were fined and three impounded.

“Directions have been issued to activate smog counters at the hospitals in the city,” he shared.

Urging the citizens to wear masks and goggles while going out, the official said that that smog could cause eye irritation, a sore throat and difficulty in breathing.