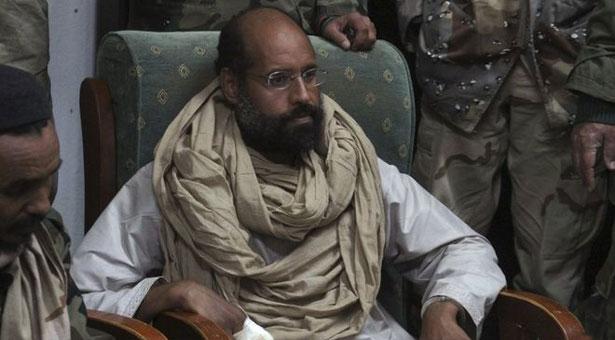 TRIPOLI: A Libyan court on Tuesday sentenced slain dictator Moamer Qaddafi’s son Seif al-Islam and eight other defendants to death for crimes during the 2011 uprising.
Former intelligence chief Abdullah Senussi and Qaddafi’s last prime minister Al-Baghdadi al-Mahmudi were also among those sentenced to death.
Seif al-Islam was not in court because he is held in the southwestern hill town of Zintan by militia opposed to the Tripoli authorities.
The trial, which opened in the Libyan capital in April last year, has been dogged by criticism from human rights watchdogs and an unresolved dispute with the International Criminal Court in The Hague over jurisdiction in the case of the Qaddafi son.
The 37 defendants were charged with crimes including murder and complicity in incitement to rape during the 2011 uprising that toppled the dictatorship.
The militia holding Seif al-Islam is loyal to the internationally recognised government which fled to the remote east last August when a rival militia alliance seized the capital and set up its own administration.
Seif al-Islam’s sole appearances before the court have been by video link and there have been none since May last year.
Most of the other defendants are held in the capital, but some are held in Libya’s third city Misrata which is loyal to the Tripoli authorities.
The UN Security Council referred the conflict in Libya to the ICC in February 2011 amid Qaddafi’s repression of the popular uprising against his decades-old regime at the height of the Arab Spring.
Seif al-Islam is wanted by the Hague-based court on charges of war crimes and crimes against humanity.
ICC prosecutors say that as part of his father’s "inner circle", he "conceived and orchestrated a plan to deter and quell, by all means, the civilian demonstrations against Qaddafi’s regime".
He has been held in Zintan since his capture in November 2011 despite repeated ICC demands for Libya to hand him over for trial.
Charges before the Tripoli court also included kidnapping, plunder, sabotage and embezzlement of public funds.
Human rights groups have expressed concerns about the trial, criticising the fact that the accused have had only limited access to lawyers and key documents.