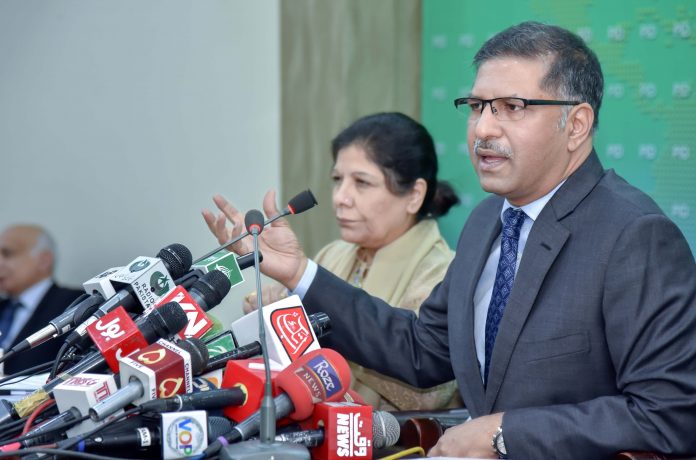 ISLAMABAD: Caretaker Federal Minister for Information, Broadcasting, Power, National History and Literary Heritage Syed Ali Zafar Tuesday said power load shedding would be controlled by the end of June and July onwards, as the weather and water situation in dams were improving considerably.
Addressing a press conference here flanked by Finance Minister Shamshad Akhtar, he said reasons for load shedding were lesser water in dams, change in demand and supply situation, transmission problems and electricity theft.
The minister said the installed electricity capacity was 28,000 megawatt, while load shedding in previous days was due to repair of plants, load on the transmission system and low water level in dams. Weather has an effect as electricity demand peaks in the months of June and July and decreases in December, he added.
At the beginning of June, the hydel power production came down from 6000 to 3000 megawatt, 1200 megawatt Port Qasim Power plant developed fault, load on transmission lines affected the grid stations and 1000 megawatt Biloki power station stopped operation that led to spike in load shedding, he said.
Presently, the demand was at 23000 to 24000 megawatt against the supply of 21000 to 22000 megawatt. The load shedding should not be too much when the shortfall was of about 2000 megawatt, he said.
However, he said the situation had improved after recent rains and better weather, increase in hydel production to 5000 megawatt and restoration of electricity generation from Port Qasim power plants after rigorous effort. Ali Zafar said in previous years, the production of electricity was increased, but transmission capacity remained the same.
Ali Zafar underlined the need for building of dams and water and energy conservation. “No dam was built in the last 40 years and we also did not work on how to save electricity, while the methods of usage of water were 100 years old and nothing new was done,” he added.
He said it was obligation of the government to tell the people about the situation of power load shedding.
Ali Zafar stressed that the top priority of the government was to hold fair, transparent, peaceful and timely elections and then transfer power to the next government.
The government will fully facilitate the Election Commission in holding of elections, he said and added, decisions of the caretaker cabinet would be totally apolitical.
The minister reiterated that the caretaker government would not indulge in any blame game as it was against its mandate and policy. “Our aim is not to level allegations but we will make policies and take steps which are beneficial for the people and the country. The caretaker government will prepare guidelines for the next government,” he added.
The minister said under Article 19A it was responsibility of the government to apprise people about facts.
“Democracy cannot strengthen without freedom of information. People have the ability to reach their own conclusions by looking at the facts. With input from the people, the government gets guidance and can work further sincerely and honestly to the advantage of people,” he added. – APP