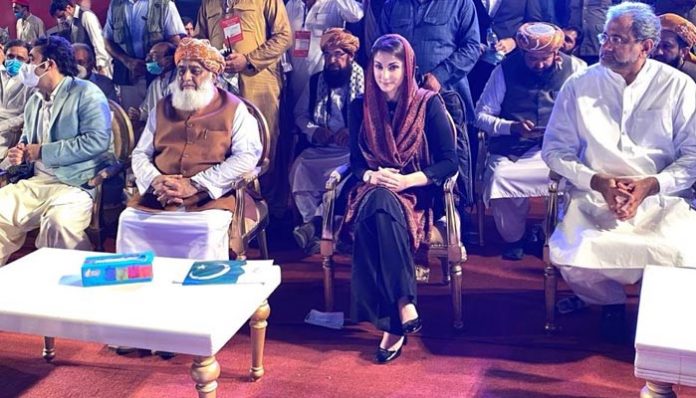 PML-N vice-president Maryam Nawaz on Sunday send a strong message to Prime Minister Imran Khan, saying in the “this is a fight between elders, there is no room for children”.  Khyber News reported. She was addressing the Pakistan Democratic Movement’s (PDM) second major anti-government rally at Karachi’s Bagh-e-Jinnah.

“The world knows that you have taken over NAB Federal Investigation Agency, Federal Board of Revenue, Securities and Exchange Commission of Pakistan,” Maryam says to PM Imran Khan as she addressed the Karachi jalsa.

Responding to PM Imran Khan’s allegations against her and Bilawal, she said: “The person who spent his life living off his rich friend’s money should not make such comments.”

Talking about her relationship with other party leaders, she said that despite the parties being PML-N’s political opponents, Maulana Fazlur Rehman, Bilawal Bhutto Zardari, Asif Zardari, and Mahmood Achakzai had always treated her with the utmost respect. Referring to statements about imposing a ban on PML-N, she said that if the party was

Meanwhile, addressing the Karachi jalsa, PPP chairman Bilawal said: “We want [Pakistan to have] true democracy. Give us true democracy. The democracy that comes with the will of the people.” PPP chairman said that Punjab has been turned into a “joke” and “attempts are being made to rob Sindh of its rights”. He said Sindh was not given Rs 300 billion for NFC award. PPP chairman said this is not a fight to gain power. “Whenever there is an attack on democracy, people are crushed under the weight of such injustice.”

In the end, Maulana Fazlur Rehman, in a wide encapsulating speech, speaks of the PDM’s aims, which are to restore a “free, democractic atmosphere” and to ensure the survival of the state.

“No amendment will be accepted which would reduce the rights of the people,” said Fazlur Rehman “If the people of Sindh do not want, no one can dare to divide Sindh.”