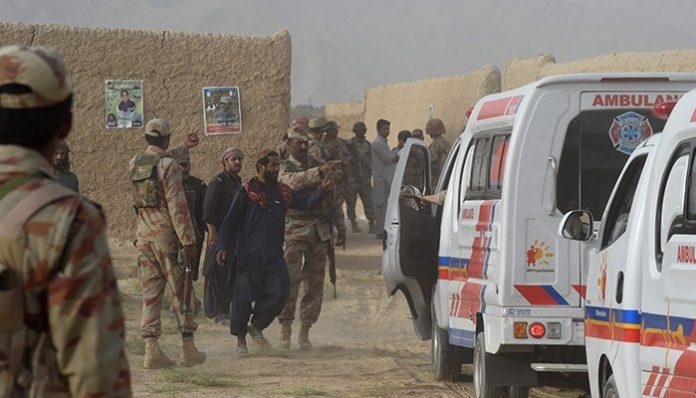 QUETTA: At least 128, including Balochistan Awami Party (BAP) candidate Nawabzada Siraj Raisani, were martyred when a suicide explosion hit an election gathering in the Darengarh area of Mastung on Friday, the caretaker provincial home minister confirmed.
Confirming the death toll, Home Minister Agha Umar Bangalzai said that more than 120 people were wounded in the blast.
Lashkari Raisani confirmed his brother Siraj had lost his life in the explosion. “Aslam Raisani and I are also receiving threats,” he said.
Officials of the Bomb Disposal Squad (BDS) confirmed that it was a suicide blast. They said that around 16-20 kilogram of explosives were used in the explosion.
Following the incident, an emergency was declared in Quetta hospitals, with additional medical staff summoned.
Raisani, a candidate of the recently-formed Balochistan Awami Party from PB-35 constituency, was the younger brother of former Balochistan chief minister Nawab Aslam Raisani. The BAP has announced three days of mourning.
In July 2011, Siraj Raisani lost his 14-year-old son in a terrorist attack in Mastung, in which several others, including security personnel, were killed.
Chief of Army Staff General Qamar Javed Bajwa expressed sorrow over the loss of innocent lives and condemned the terror attack.
“Pakistan lost a highly devoted and capable politician Siraj Raisani. Attempts of inimical forces to derail important democratic activity shall not succeed,” said DG ISPR Major General Asif Ghafoor.
“United we all Pakistanis shall IA defeat them.”
Pakistan Tehreek-e-Insaf (PTI) chairman Imran Khan also condemned the terrorist attack saying that he was “saddened to learn of Nawabzada Siraj Raisani’s shahadat in this targeted attack as well as the shahadat of 15 other innocent citizens.