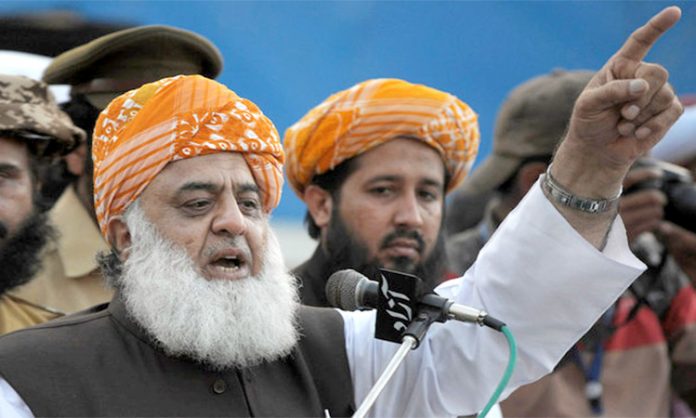 KARACHI: Jamiat Ulema-e-Islam – Fazl (JUI-F)-led Azadi March will start from Karachi on Sunday.
The caravan led by Maulana Fazlur Rehman will proceed to the Super Highway (M9) after smaller demonstrations will depart from the city’s six districts and gather at Sohrab Goth, a statement from the party said.
The Azadi March will officially begin “after an address by Maulana Fazl at Sohrab Goth” to show solidarity with the people of Indian Occupied Kashmir.
A large number of buses and other vehicles have been hired to transport the participants of Azadi March. A senior party member said that the number of buses had already crossed 400.
According to the No Objection Certificate issued by the office of the deputy commissioner of Karachi’s East zone, permission was granted to JUI-F leader Maulana Fatehullah, for the party to hold a rally adjacent to Super Highway, near a petrol pump in Sohrab Goth.
The participants of Azadi March from across the country will gather near Tarnol before entering Islamabad on October 31.
A meeting between the Rahbar Committee of the opposition parties and the government’s negotiating team held on Friday ended without yielding any result as deadlock persisted on deciding the venue of culmination of the Azadi March.
Inside sources said the government’s negotiating team rejected the demand of the Rehbar Committee to allow gathering of their workers at D-Chowk in Islamabad.
The government team stuck to the stand that the opposition parties would be allowed to hold a public meeting at the Parade Ground.
On Friday, the JUI-F chief said that the Azadi March would go ahead and refused to accept any deals with the government. He said the government was using different tactics which will only create strife.
Fazl said the federal government is shutting down petrol pumps, ration shops, stopping traffic and one organisation of JUI-F has also been banned, which prove the undemocratic intentions of the regime.