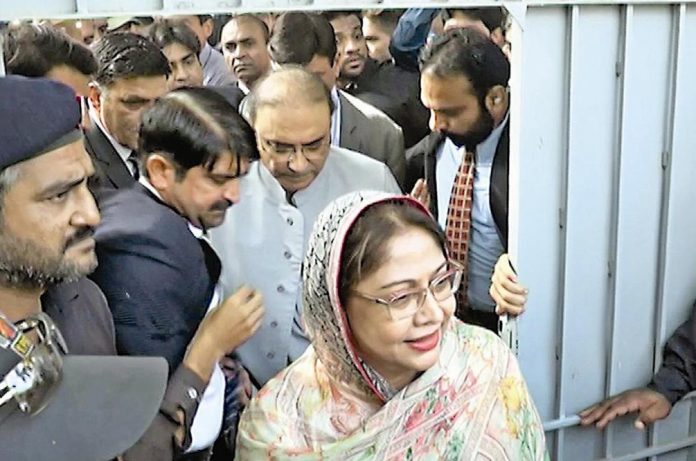 ISLAMABAD: The accountability court of Islamabad on Monday extended the judicial remand of former president Asif Ali Zardari and his sister Faryal Talpur till September 5 in the mega-money laundering case.
Accountability Judge Muhammad Bashir instructed the National Accountability Bureau (NAB) to provide copies of the money laundering case to the accused and adjourned the hearing till September 5.
Copies of the Park Lane reference were handed over to the suspects during today’s hearing.
Both Zardari and Talpur are being held at Adiala Jail after they were arrested by the accountability watchdog earlier this year on charges of laundering billions of rupees through fictitious accounts.
Zardari, who was shifted to Adiala Jail on Friday, appeared before the court today and claimed before the judge that he was being mistreated in the prison.
The former president’s counsel Sardar Latif Khosa had filed a plea in the court asking that his client be provided with A-class facilities in prison, including air-conditioning, medical facilities and permission to meet his family.
Khosa again asked the judge today to grant better facilities to Zardari in the prison. “My client suffers from a number of medical conditions which may pose a threat to his life,” the counsel told the court, as he asked for air-conditioning in the cell.
The court will hear the plea for A-class facilities in prison on Tuesday (tomorrow).
Meanwhile, Deputy Prosecutor NAB Sardar Muzaffar Abbasi informed the accountability court that the accountability bureau has decided to file a supplementary reference against Zardari and Talpur in the money-laundering case.
The reference will be filed in the light of new evidence found by NAB in the case, he added.