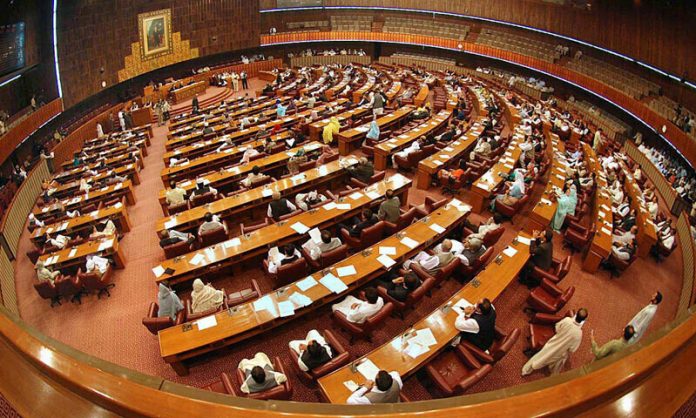 ISLAMABAD— The National Assembly, on Thursday passed “The Elections (Amendment) Bill, 2022″ reversing the previous government amendments which had granted voting rights to overseas Pakistanis and made use of electronic voting machines (EVMs) in the next general elections compulsory.

The house reversed the PTI-era legislation and directed the Election Commission of Pakistan (ECP) to first launch a pilot project for overseas Pakistanis to vote in the by-elections. The pilot project should determine the fate of the EVM machines and overseas voting.

Speaking on the occasion in the House, the Law Minister Azam Nazeer Tarar rejected the impression that the amendment is aimed at depriving overseas Pakistanis of their right to vote.

He said overseas Pakistanis are precious asset of the country and the government does not believe in snatching their right to vote.

Regarding use of Electronic Voting Machines (EVM), the Law Minister said we are not against use of technology, but we have concerns about misuse of technology as Results Transmission System had failed in last general elections to favour a particular political party.

He said the Election Commission of Pakistan had also expressed its inability to hold elections through I-Voting and EVMs in a short span of time and without proper homework.
He said two amendments are being brought to revive the Elections Act 2017, enabling the ECP to ensure free, fair, and transparent elections.

Under the amendment in Section 94 of the Election Act, 2017, the Commission may conduct pilot projects for voting by Overseas Pakistanis in bye-elections to ascertain the technical efficacy, secrecy, security, and financial feasibility of such voting and shall share the results with the government, which shall, within 15 days from the commencement of a session of a House after the receipt of the report, lay the same before both Houses of the Parliament.

Under Amendment in Section 103 of the Election Act, 2017, the ECP may conduct pilot projects for utilization of EVMs and biometric verification system in the bye-elections.
Opposition Leader in the National Assembly, Raja Riaz Ahmed has said the Assembly should complete its tenure and elections should be held on time.

Responding to Prime Minister Shehbaz Sharif’s remarks, he assured that the opposition will play its positive and constructive role in running affairs of the House.

Earlier, Prime Minister Shehbaz Sharif, while speaking on the floor of the House, congratulated Raja Riaz Ahmed for becoming Leader of the Opposition.

He assured the Leader of the Opposition of his government’s full cooperation in running business of the House in an amicable manner.

The Prime Minister said the treasury benches will pay utmost attention to the speech of the Leader of the Opposition by burying the bad traditions of the past.

Responding to a Calling Attention Notice, Minister of State for Interior, Abdul Rehman Khan Kanju assured the House to make every possible effort for the maintenance of government accommodations in Sector G-6 and F-6 of Islamabad.