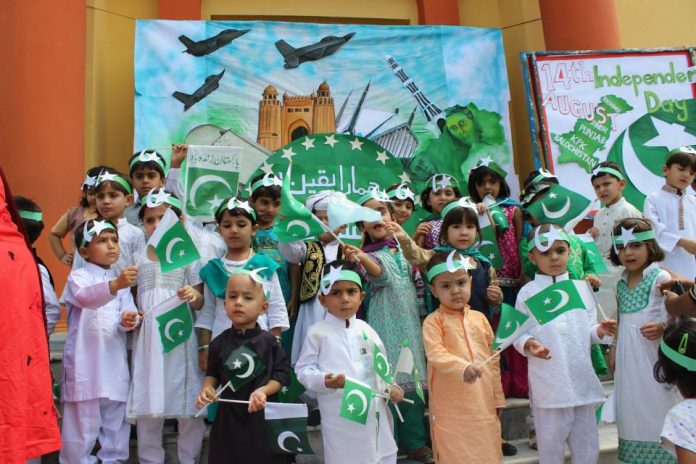 ISLAMABAD: The nation celebrates Pakistan Day on Friday with renewed commitment to work hard for the progress and prosperity of the country.
The day marks adoption of historic Lahore Resolution this day in 1940 that provided a framework for realization of the goal of a separate homeland for Muslims of South Asia.
The Day will dawn with 31-gun salute in the federal capital and 21-gun salute in provincial capitals.
Special prayers will be offered in mosques after Fajr prayers for the progress, prosperity and solidarity of the country. It will be a public holiday. National flag will be hoisted on major government buildings.
The main feature of the day will be the spectacular military parade at the Parade Avenue in Islamabad where the armed forces will conduct march past and the fighter jets will present aerobatic maneuvers.
Floats depicting the culture of different regions will also be displayed on the occasion.
President Mamnoon Hussain will be the chief guest while Sri Lankan President Maithripala Sirisena will be the guest of honor on the occasion.
Prime Minister Shahid Khaqan Abbasi and the three services Chiefs will also witness the parade.
An investiture ceremony will be held at Aiwan-e-Sadr in the evening where President Mamnoon Hussain would confer awards and medals to personalities for their outstanding contribution in different fields. This year a total of one hundred and forty one Pakistanis as well as foreign nationals will be conferred upon civil awards. Former Cuban President Dr Fidel Castro will be honoured with posthumous Nishan-e-Pakistan while late human rights champion Asma Jahangir will be awarded a posthumous Nishan-e-Imtiaz for her undying services for the citizens of the country.
In Lahore, main ceremony of Pakistan Day will be held at the Governor House in which Punjab Governor Malik Muhammad Rafique Rajwana will participate as the chief guest.
A change of guards ceremony will be held at the mausoleum of Allama Iqbal.
The Nazaria Pakistan Trust and Pakistan Movement Workers Trust will organize a special sitting regarding at the trust building.
Chairman NPT and former President Muhammad Rafique Tarar will preside over the sitting while Pakistan movement workers will be the guests of honour on this occasion.
In Khyber Pakhtunkhwa, the main function in connection with the Pakistan Day will held at the Governor House Peshawar tomorrow.
Governor Iqbal Zafar Jhagra will give awards to distinguished figures for their outstanding performance in different fields.
A three-day Pakistan Zindabad festival will also begin at tourist resort, Malam Jabba in District Swat tomorrow.
Paragliding, skiing, archery, race and painting competitions will be held in the festival.
In Quetta, the main investiture ceremony will be held at the Governor House Quetta in which Governor Balochistan, Muhammad Khan Achakzai will give away awards to the keynote personalities for showing outstanding performance in their respective fields.
Here is our Karachi corresponden Malahat Solat to give details about the programs in connection with Pakistan Day.
In Gilgit-Baltistan, national flag will be hoisted in all public and private building. Force Command Northern Area has also finalized Pakistan day programs.
The Pakistan High Commission in London has also finalized preparations for Pakistan Day. A large number of Pakistani community members will witness the ceremony with traditional zeal. Pakistan High Commissioner to UK Syed Ibne Abbas will hoist the Pakistani flag.