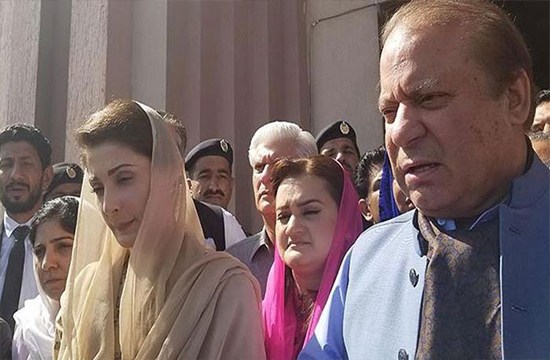 ISLAMABAD: Former Prime Minister Nawaz Sharif and his daughter Maryam Nawaz have reached accountability court to appear in the Avenfield properties reference, filed by National Accountability Bureau (NAB) against former Prime Minister (PM) Nawaz Sharif and his family.
According to the details, former Prime Minister and his daughter Maryam Nawaz reached Islamabad by road due to inclement weather, Judge Muhammad Bashir will resume the hearing of the case.
Earlier on yesterday, the investigating officer in the Avenfield properties reference against former prime minister Nawaz Sharif and his family said that the NAB investigation proves Nawaz was the owner of the London flats, while he was holding public office.
Nawaz and his family are facing three corruption cases in the Accountability Court-I after the NAB filed references against them in light of the Supreme Court’s verdict in the Panama Papers case.
During the hearing headed by Justice Mohammad Bashir, Imran Dogar said that supplementary reference was filed against the accused after final report. He told the accountability court that the trust deeds submitted by Maryam Nawaz to Joint Investigation Team (JIT) were proven false.He said that he got the copy of record that included land registry, London flat, utility bills and council tax documents on March 28, 2018. During the probe, Nawaz Sharif was found owner of Avenfield properties which proved that the Sharif family is involved in corruption and corrupt practices, he added.“The properties were purchased through offshore companies in someone else’s name [to hide ownership],” Dogar informed the court.
The investigating officer asserted that the suspects failed to prove a source of income for purchasing the properties, adding that the London flats were in the use of Nawaz and his family since 1993.
In his statement today, Dogar also stated that Securities and Exchange Commission of Pakistan official Sidra Mansoor informed NAB about the Hudaibiya Paper Mills.Ex-prime minister Nawaz Sharif and his daughter were unable to appear in the court today after which their exemption pleas were submitted in the court.
Similarly, Maryam’s counsel Amjad Pervez also failed to appear in court for similar reasons and his associate counsel submitted a power of attorney on behalf of his client.
During the hearing, intermittent power cuts disturbed the proceedings, with the court continuing the trial by use of emergency lights.
Earlier, National Accountability Bureau (NAB) had decided to complete the trial of Avenfield reference on first priority over which Nawaz’s lawyer appealed to conclude the hearings of all three cases togetherHe asked to record the statement of Panama Joint Investigation Team (JIT) head Wajid Zia’s statement in all three references at the same time on which NAB prosecutor Sardar Muzafar said that this could be done before the cross-examination.
SC disqualified Sharif from office in July over unreported sources of annual income of about $10,000, a salary the former premier denies ever receiving. The high court also ordered the NAB to investigate and conduct a trial into the Sharif family’s wider finances, including the London properties.
Sharif was also ousted from the presidency of the ruling Pakistan Muslim League-Nawaz (PML-N) party, which elected close ally Shahid Khaqan Abbasi as prime minister after Sharif was disqualified.At the last hearing on April 30, Nawaz’s counsel had requested the court not to allow recording of Dogar’s statement. The judge ruled that he will give an order on the plea later and directed for the recording of Dogar’s statement.
In his testimony, Dogar apprised the court of the course of investigation in the reference. The court then adjourned the hearing till Thursday.