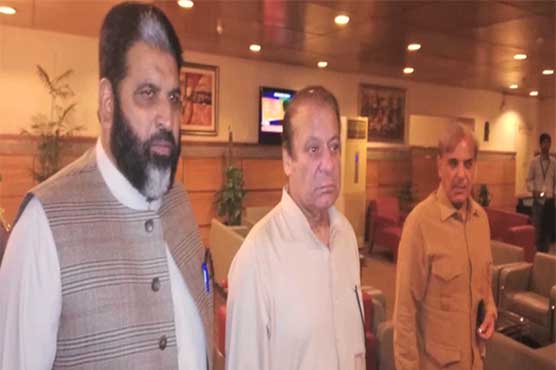 ISLAMABAD: Former prime minister Nawaz Sharif, his daughter Maryam Nawaz and son-in-law Capt (retd) Safdar have been released on parole from Adiala Jail in the wee hours of Wednesday to attend funeral of Begun Kulsoom Nawaz, wife of Nawaz Sharif, who died in London on Tuesday.
Nawaz Sharif, Maryam Nawaz and Capt (retd) Safdar have left for Jati Umra from Adiala Jail after they were released on parole for 12 hours to attend funeral of Begun Kulsoom Nawaz.
Pakistan Muslim League-Nawaz (PML-N) president Shahbaz Sharif is also travelling with them.
Nawaz Sharif, Maryam Nawaz and Capt (retd) Safdar will remain within the boundaries of Jati Umra during their 12-hour release on parole.
Begum Kulsoom Nawaz, the wife of former prime minister and Pakistan Muslim League-Nawaz (PML-N) supremo Nawaz Sharif, passed away at London’s Harley Street Clinic on Tuesday after a prolonged battle with cancer.
The news was confirmed by PML-N president Shehbaz Sharif. Kulsoom Nawaz is survived by her husband and four children, Hassan, Hussain, Maryam and Asma.
“My sister-in-law and wife of Mian Nawaz Sharif, Begum Kulsoom Nawaz is no more. May her soul rest in peace,” Shehbaz Sharif said in a twitter announcement.
“Nawaz Sharif had always consulted Kulsoom Nawaz during his tough hours. She (Kulsoom Nawaz) challenged dictatorship courageously,” stated Shehbaz while adding at the same time late Kulsoom’s affiliation with democracy was proven and time-tested.
Shehbaz added nation will always remember services of Kulsoom Nawaz for democracy.
Nawaz Sharif and Maryam Nawaz, who are serving sentence in Adiala Jail, have also been informed about the demise of Begum Kulsoom. The former first lady was diagnosed with lymphoma (throat cancer) in August 2017 after which, she was shifted to London’s Harley Street Clinic for treatment.
Nawaz Sharif and Maryam Nawaz had flown to London several times to inquire about the health of Kulsoom Nawaz. Family sources told that Begum Kulsoom had inquired about Nawaz and Maryam last night but was not informed about their conviction.
The body of Kulsoom Nawaz will be brought of Lahore where her funeral prayers will be held on Friday and she will be buries alongside her father-in-law, Mian Sharif, at Jati Umra.
Hassan and Hussain Nawaz won’t return to attend the funeral prayers owing to legal complications, well-informed sources told Dunya News.
The accountability court had declared former prime minister Nawaz Sharif’s children Hassan Nawaz and Hussain Nawaz as absconders after both failed to appear in the court despite non-bailable arrest warrants issued against them.