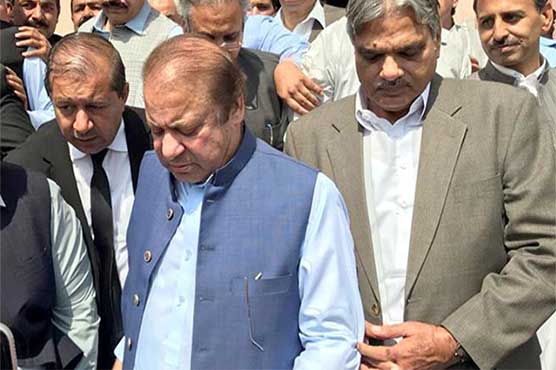 ISLAMABAD: Former prime minister and Pakistan Muslim League-Nawaz’s (PML-N) leader for life Nawaz Sharif on Thursday decided against presenting his defense in Al-Azizia reference.
Accountability Court Judge Arshad Malik heard the Al-Azizia reference where Nawaz Sharif recorded his statement.
During the hearing, the former premier said that he will not present his defense in the Al-Azizia Steel Mill reference.
He said, “A case was formed against me on the basis of allegations leveled by my political opponents and the prosecution has failed to prove the allegations against me.”
“I am neither the real owner nor a benamidaar of Al-Azizia Steel Mill or Hill Metal Establishment. The prosecution could not present any evidence against me in this regard,” he added. The former premier continued, “I did not send any money from Pakistan to my sons for foreign education, living or business.”
Nawaz Sharif said, “NAB did not present any such evidence ascertaining that I established Al-Azizia Steel Mill or Hill Metal Establishment. The prosecution also failed to present evidence proving that I was the guardian of Hasan and Hussain Nawaz and that they were benamidaars. They also failed to prove indictment charges against me.”
The former premier also stated, “This case was formed on the basis of allegations levelled by my political opponents and a one-sided report of the joint investigation team (JIT). The JIT report incorrectly showed me as the owner of Al-Azizia Steel Mill and Hill Metal Establishment and even the Supreme Court bench was not fully satisfied with the report. The top court sent the matter to the trial court so there are no doubts.”
“Except for JIT head Wajid Zia and the investigation officer, no other witness gave statements against me. Their statements are not acceptable testimonies, however, they had both accepted that there were no documents to prove that I was the owner of Al-Azizia Steel Mill and Hill Metal Establishment,” Nawaz added.
Al-Azizia Steel Mill was established by my father in 2001 and Hussain Nawaz was 29 years old at that time, he shared.