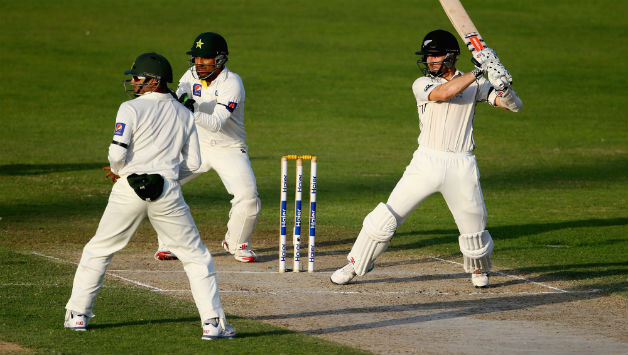 CHRISTCHURCH: New Zealand debutants Colin de Grandhomme and Jeet Raval helped their side into a strong position at the close of the second day´s play of the first test against Pakistan at Hagley Oval in Christchurch on Friday.
Left hand opening batsman Raval was on a composed 55, while Henry Nicholls was 29 not out as New Zealand were 104 for three at stumps, 29 runs behind Pakistan´s first innings 133.Seam-bowling all-rounder De Grandhomme, a surprise selection, dominated the first two sessions as the 30-year-old´s nagging line and length provided him with figures of six for 41, the best for a New Zealander on debut.
De Grandhomme became the eighth New Zealander to take a five-wicket haul on debut, doing just enough off the pitch and through the air to create doubt for Pakistan´s batsmen in bowler-friendly conditions.
Pakistan´s bowlers were also penetrating, with Mohammad Amir, Sohail Khan and Rahat Ali all taking a wicket in the final session as the hosts slumped to 40 for three when Ross Taylor fell for 11.Amir had earlier trapped Tom Latham in front for one, before Sohail had New Zealand captain Kane Williamson caught at first slip by Sami Aslam for four.
Raval, who was on the tour of southern Africa earlier this year but did not play a test, was composed on debut as he left balls he needed to and put away the rare bad deliveries.
The 28-year-old, who also took three catches in the slips, brought up his first test half century from 89 balls when he dabbed Rahat behind point for two runs as he and Nicholls settled New Zealand´s innings with an unbeaten 64-run stand.
The home side´s bowlers had earlier made the most of Williamson winning the toss, reducing the visitors to 88 for four at lunch with De Grandhomme taking three wickets.
They continued to put pressure on Pakistan´s batsmen during the middle session, with De Grandhomme completing his five-wicket haul when he had Sohail caught at short midwicket.
The Aucklander then wrapped up the innings when Rahat Ali nicked behind to wicketkeeper BJ Watling for a five-ball duck.
Captain Misbah-ul-Haq provided the only real resistance for Pakistan with an obdurate 31 from 108 balls.
Thursday´s opening day was washed out. …Agencies