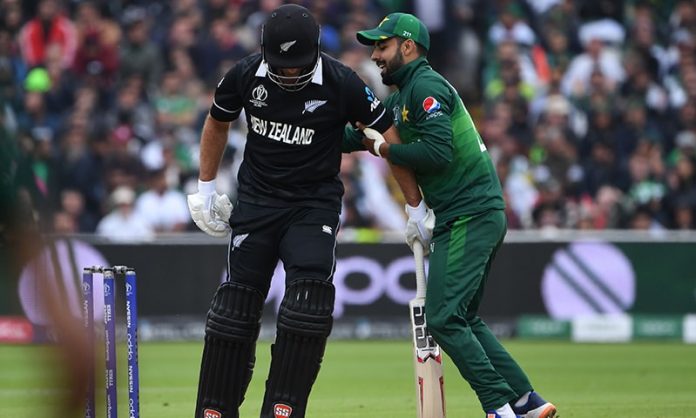 EDGBASTON: New Zealand managed to post 237 runs for the loss of six wickets, thanks to a 100-plus runs partnership between James Neesham (97 not out) and Colin de Grandhomme (64), in their World Cup match against Pakistan at Edgbaston on Wednesday.
Pakistani bowlers ripped through Kiwis top order who were 83 for 5 by the 27th over. Mohammad Amir struck on his first ball, dismissing New Zealand opener Martin Guptill in the second over.
Shaheen Afridi stood out, bagging three wickets for just 28 runs in his 10 over spell. He dismissed New Zealand opener Colin Munro in the seventh over, which was all the more precious as it was also a maiden.
Haris Sohail successfully held on to the ball at first slip after Munro tried to drive a slightly wide delivery by Afridi.
He then took out Ross Taylor as Pakistan skipper Sarfraz Ahmed dove to his right to take an impressive one-handed catch in the ninth over. New Zealand were 38 for 3 when Tom Latham joined his captain Kane Williamson on the crease.
Latham too fell to Afridi who struck again in the 13th over. The Guardian described Afridi’s spell as the “spell of his teenage life”. Until that point, Afridi had picked up three wickets for 11 runs in seven overs.
New Zealand were jolted by Pakistani bowling attack once again when Shadab Khan bagged the crucial wicket of New Zealand skipper Kane Williamson (41) in the 27th over. The wicket came just as Williamson and teammate James Neesham were moving towards a partnership after New Zealand’s top order crumbled before Pakistani bowlers.
It took 32 overs for New Zealand to make it 100 runs, who lost five wickets along the way.
Neesham and de Grandhomme then stood their ground to give their team a fighting chance, forming a 100-plus runs partnership.
New Zealand had won the toss and chose to bat first against Pakistan in the high-stakes Cricket World Cup game at Edgbaston, Birmingham.
Speaking after the toss, Ahmed said that he would have chosen to bat first as well, had he won the toss.
He admitted that “catching was still a concern but we work hard [to improve] it”.
“Hopefully we’ll do well as a fielding unit today,” he said.
When asked if Pakistan — who bounced back on Sunday after a demoralising defeat from India and kicked South Africa out of the tournament — could make it to the World Cup semifinals, Ahmed said: “Pakistan can do anything.”
New Zealand captain Williamson was quoted by ESPN Cricinfo as saying: “You turn up and know you’ll have a tough game, as Pakistan are a very tough side. For us, it’s trying to build on those performances and keep improving.”
New Zealand have the chance to follow Australia into the semifinals of the Cricket World Cup if they beat Pakistan in today’s match.
Pakistan are hoping for a repeat of 1992 when they beat New Zealand in the semi-final and went on to win the title. They can move one point behind fourth-place England with a win, and go level with Bangladesh, as the race for the finals spots unexpectedly opens up.
The match was delayed by an hour because of a wet outfield. Following pitch inspection at Edgbaston at 2.30pm — when the game was scheduled to start — it was announced that the toss would take place at 3pm and the match at 3.30pm with no overs lost.
The delay did not deter Pakistan’s fans, who arrived at the stadium with a flourish.