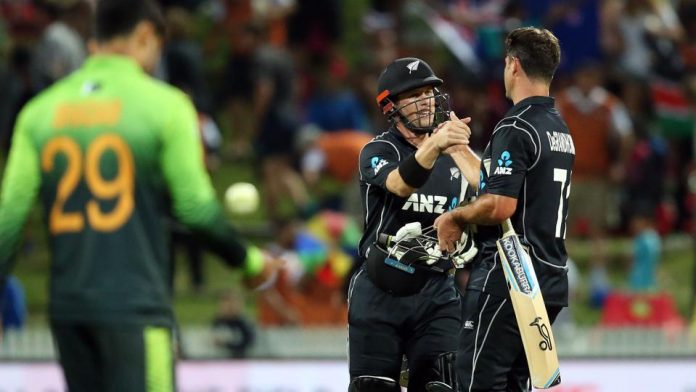 WELLINGTON: New Zealand on Friday whitewashed Pakistan after defeating the green shirts by 15 runs in the fifth one-day international (ODI) in Wellington.
Chasing down the hosts’ target of 272, Pakistan were all bowled out for 256 with one over remaining.
Batting first, the black caps scored 272 runs in the allotted overs, thanks to the brilliant century of Martin Guptill and half century of Ross Taylor.
Rumman Raees took three wickets while Faheem Ashraf sent two batsmen back to the pavilion.
While chasing the target, top order batting lineup stumbled down once against; however it was Haris Sohail who faced the bowlers with an outstanding performance and scored 63 runs.
He was followed by Shadab Khan with 54 runs, but their performance did not help the team to prevent the whitewash.
Among the other players, Aamer Yamin remained prominent with 32 runs while Faheem Ashraf and Muhammad Nawaz with 23 runs each.