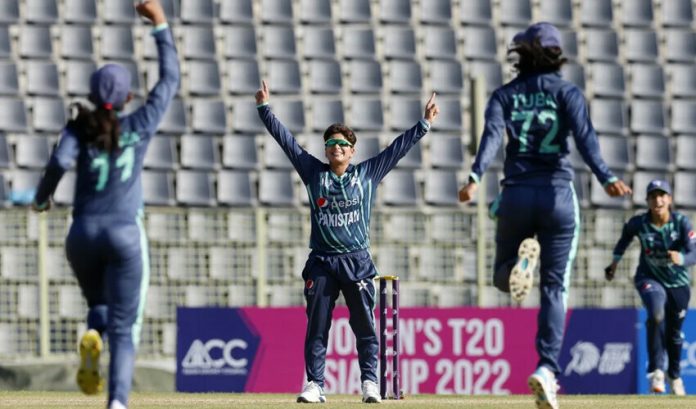 She played an outstanding 37-ball 56 knock, followed by a superb bowling spell to hand Pakistan a 13-run victory ¬– their first against India since 2016 ¬– in Sylhet Friday. The 35-year-old bagged figures of two for 23 from her four-over spell in the Women’s Asia Cup.

In reply to Pakistan’s 138-run target, India went off to a decent start as openers managed to provide a 23-run stand for the first wicket.

However, Nashra Sandhu provided a breakthrough in the shape of Sabbhineni Meghana’s (15) wicket. She ended up with the figures of three for 30.

Meghana’s wicket triggered a collapse, as wickets started to tumble at regular intervals. Dayalan Hemalatha showed some resistance with the bat as she scored 20.

Richa Ghosh played a brilliant cameo with the bat as smashed three maximums and a boundary for her 26. However at that stage the target, Sadia Iqbal claimed her crucial wicket to reduce India to 120/9.

Aiman Anwer claimed the last wicket of the game as Pakistan bowled India out for 124 in 19.4 overs.

Earlier, skipper Bismah Maroof played a brilliant knock of 32 as Pakistan reached 137/6 in their allotted 20 overs.

Sidra Ameen and Muneeba Ali provided a 26-run opening stand. Sidra scored 11 while Muneeba went back to the hut after scoring 11.

Dar’s late burst with her outstanding batting as she scored unbeaten 56 off 37.

Pakistan will paly its second match against host New Zealand on Saturday (tomorrow) in the tri-series. New Zealand will play  Bangladesh on Sunday.