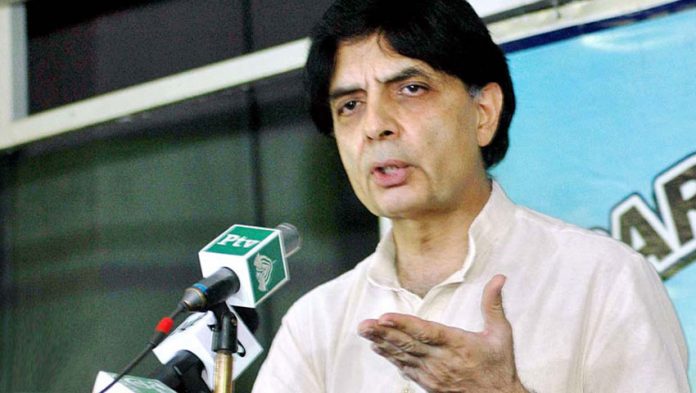 ISLAMABAD: Federal Minister for Interior Chaudhry Nisar Ali Khan on Wednesday urged political rivals to refrain from politicking and point scoring on the PSL’s final, saying that organizing the cricket match in Lahore will improve Pakistan’s image.
The minister, who visited different localities of his constituency including Barka, Papen Bangla and others, was talking to notables and elected representatives on Wednesday.
He said that peace and development have a paramount importance for the people of Pakistan and not the confrontation or chaos.
“Politics is name of service and argument but it is not done with insults and provocation. Those who change their parties cause bad name for the good and democratic principles, he said, adding that respect is gained through character and not ranks.
Ch. Nisar said the most difficult task is to govern Pakistan where at one side there is a heap of problems and on other side
expectations of people, but thanks to Allah Almighty, the government of Pakistan Muslim League (Nawaz) was endeavouring to resolve problems of people and come upto their expectations.
Regarding performance, he said there exists a clear difference between Pakistan of 2017 and Pakistan of past, adding that situation would further improve in days to come.
The minister said those who did nothing for the country as well as the nation and set examples of inefficiency during their tenure are trying to misguide the nation through levelling false allegations just to hide their incompetence.
“In spite of their lies we will speak truth. It is a fact that people will decide. Our intentions are good and we have clean hands. We have a courage to face all circumstance and we will face them in future as well.”
The Minister said he takes politics as public service and not as business or to mint money.
Referring to development work in his constituency, Ch. Nisar said during his 32 years political career, particularly during his governmental tenure, he managed to execute lot of development work and served people with commitment.
The Minister said, those who changed parties and political direction and repeatedly came to power, did not had the strength or ability to put a brick of development in the area.
The Minister urged the local elders and dignitaries to point out problems of people and play an active role in their resolution.
He said the elected representatives of the area should also play their role in eliminating problems like corruption and nepotism from police, and other government departments and work for justice keeping in mind religious principles.
The Minister said curbing of corruption at grassroots level can only be made with cooperation and help of people.
During the meeting, people of the area also discussed matters of national interests and presented problems of the area.
Replying to a question about the PSL’s final, he said organizing cricket matches in the country would improve country’s image. Politics and point scoring on all matters is inappropriate, he said.– Agencies