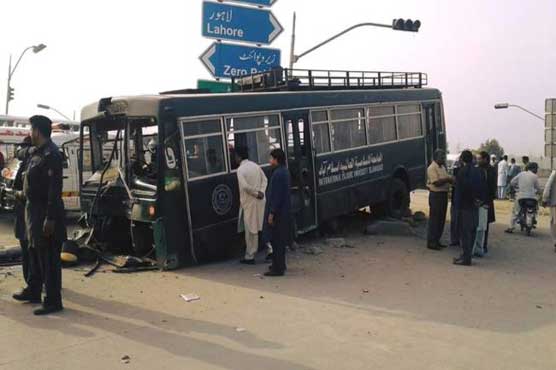 ISLAMABAD: A motorcyclist was killed while 20 others sustained severe wounds when the bus of International Islamic University met an accident on Kashmir Highway in Islamabad today (Wednesday).
According to police sources, the incident took place when two buses allegedly raced each other near G-11 sector of the federal capital.
International Islamic University’s bus driver lost control of the vehicle and rammed it into footpath while trying to overtake another bus, said police officer.
All the 20 injured students and driver have been shifted to hospital for further medical assistance.
Moreover, investigation into the matter has been launched.
On the other hand, a driver was killed whereas ten students got hurt as bus overturned near Northern Bypass in Karachi.
The mishap occurred due to high speed however, the injured were taken to the nearby hospital for medication.