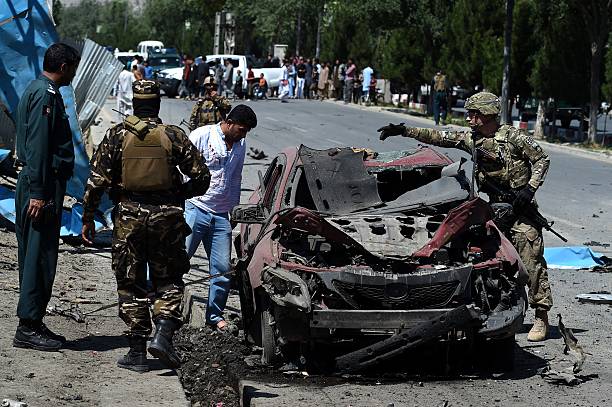 KABUL: A suicide car bomb targeting a foreign forces convoy rocked eastern Kabul early Friday, killing at least one civilian and injuring four in an area where many expatriates reside, the Afghan interior ministry said.
“Unfortunately around 9:00 am, a car bombing took place in (the) Qabil Bay area of Kabul,” ministry spokesman Najib Danish told foreign news agency, giving the toll and adding that police are investigating.
Earlier, Danish had said the explosion took place “in” the vehicle, which he initially said belonged to an international contractor.
Another interior ministry spokesman, Nasrat Rahimi, said it was not clear if there were foreign casualties following the blast.
Local media showed extensive damage to the facades of nearby houses, and witnesses reported a strong explosion.
No group immediately claimed the attack, which is the latest to hit Kabul, one of the deadliest places in Afghanistan for civilians as both the Taliban and the expanding militant Islamic State group step up their assaults on the city.
The bombing also comes just days after Afghan President Ashraf Ghani unveiled a plan for peace talks with the Taliban, including a proposal to eventually recognise them as a political party, and invited Pakistan to participate in the peace process.
Ghani revealed his plans in a speech during international peace talks in Kabul this week that went better than expected, with officials in Washington daring to hold out hope that the longest war in United States history may be heading to a negotiated settlement.
But Kabul remains on high alert, fearing further violence.
Since mid-January, militants have stormed a luxury hotel, bombed a crowded street, raided a military compound and launched a suicide attack during morning rush hour in the capital, killing more than 130 people. …Agencies