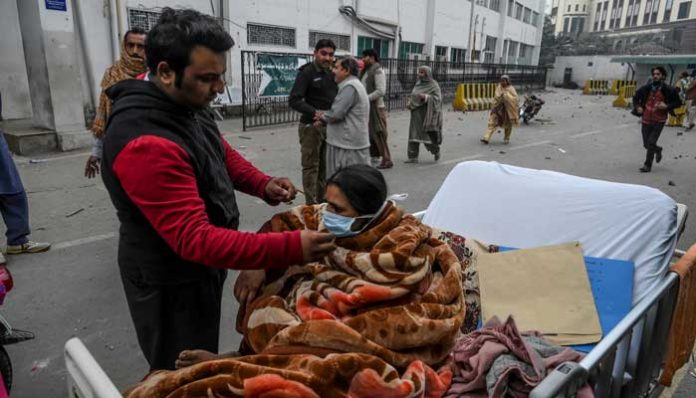 LAHORE: The out-patient department (OPD) and indoor services of the Punjab Institute of Cardiology (PIC) remained suspended on the fourth consecutive day after hundreds of lawyers rampaged through the cardiac health facility on Wednesday. The violent clash had left three patients dead.
Reportedly, hundreds of patients are still deprived of several medical tests, including angiography and echocardiography which are critically important for heart patients before doctors can proceed with their treatment.
The closure of the operation theatre has further worsened the situation for incoming patients. Dozens of patients had been already shifted to other hospitals on Wednesday evening.
However, the emergency ward has been made functional, Punjab Chief Minister Usman Buzdar stated today.
“Patients were facing difficulties due to closure of the emergency […] other services will also be restored soon,” he said, adding that it has been decided to perform legislation for the protection of hospitals, doctors and staff. He said that the Health Professionals Security Bill would soon be tabled in the cabinet.
New medical equipment, machinery, furniture and other items have been supplied to the emergency ward.
The CCU is a hospital ward specialised for the care of patients with severe cardiac conditions which require continuous monitoring and treatment.
In total, around 12,000 heart patients suffered severe hardships and 35 patients couldn’t undergo bypass, and angioplasty and angiography procedure of 250 patients was postponed due to absence of doctors and paramedics from their duties.
They demanded protection before returning to their workplaces. Other patients couldn’t undergo diagnostic tests owing to closure of medical services at all departments.
Meanwhile, the restoration work has begun for the damaged departments. The medicine counter at the OPD has been restored and medicines to admitted patients are being supplied in the intensive care unit (ICU).
Punjab government has decided to compensate the damage caused to vehicles during the rampage by lawyers.
According to details, Rs50,000 will be given for reparation of cars with 800cc engines, Rs75,000 for 1,000cc cars, Rs150,000 for 1,300cc cars and Rs200,000 for 1,600cc cars. 22 cars have been included in the official list for reparation so far.
The hospital administration has directed owners to submit their identity cards and pictures of cars. On the other hand, doctors and other staff have appreciated government’s move to assist the owners for reparation of their cars which were damaged in the clash.