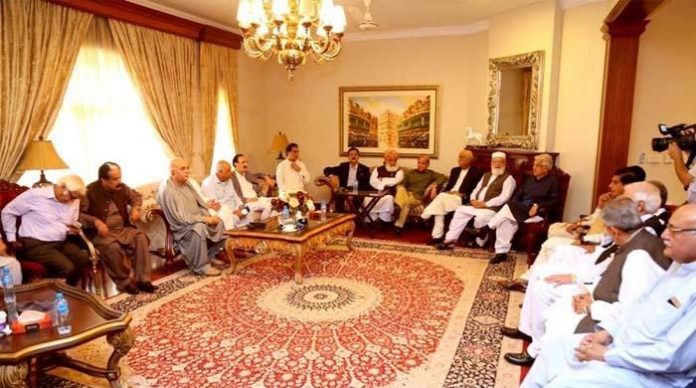 MURREE: The opposition political parties on Saturday agreed to field a joint candidate for the upcoming presidential election to be held on September 4.
Representatives of the divided opposition met at incarcerated former prime minister Nawaz Sharif’s opulent Murree residence to hammer out an agreement over a joint candidate for the September 4 presidential election.
PML-N’s acting Secretary General Ahsan Iqbal, addressing the media after the huddle, said the opposition would announce its joint candidate for the head of state’s office tomorrow (Sunday).
“It is important for Pakistan that the opposition come together and nominate a joint candidate for the office,” he said.
The PML-N leader also revealed that the opposition was opposed to allowing overseas Pakistanis to vote in the October bye-elections.
Iqbal complained that the decision to extend voting rights to overseas Pakistanis was being done in haste and alleged the Election Commission of Pakistan’s electronic systems were vulnerable to outside hacking attempts.
PML-N President Shahbaz Sharif and leaders Ayaz Sadiq, Marriyum Aurangzeb and Dr Tariq Fazl Chaudhry had arrived at the house earlier this morning for the meeting.
The PPP, represented by former opposition leader Khurshid Shah and leaders Sherry Rehman, Yousuf Raza Gilani, Raja Pervez Ashraf and Qamar Zaman Kaira, arrived later in the afternoon.
The Awami National Party’s Ghulam Ahmed Bilour and Mian Iftikhar and the National Party’s Hasil Bizenjo were also in attendance.
The decision to call the meeting had been made by PML-N leaders after a PPP delegation visited the former’s secretariat in Lahore a day before Eidul Azha (Tuesday) to seek support for Aitzaz Ahsan, who has been nominated by the PPP to contest the presidential election to be held on Sept 4.
The PPP team, comprising former Senate chairman Raza Rabbani and Khursheed Shah, had met the PML-N leadership after the latter expressed reservations over the nomination of Ahsan, who had, in a TV interview, uttered uncharitable words about Nawaz and his wife Kulsoom’s ailment.
After their meeting, PML-N’s Ahsan Iqbal had quoted PPP General Secretary Farhatullah Babar as saying that Ahsan’s name for the president’s slot was “not final”.
However, Iqbal had feared that if the opposition remained divided on launching a joint candidate, it would give a free hand to the ruling PTI to install its nominee, Dr Arif Alvi, as president.