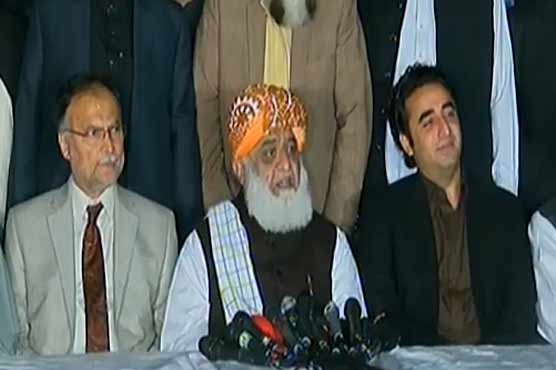 ISLAMABAD: The joint opposition has reiterated its demand for new transparent elections after a meeting of the All Parties Conference. The opposition parties deliberated on the next course of action in their anti-government campaign.
Jamiat Ulema-e-Islam-F Chief Maulana Fazl-ur-Rehman, Pakistan People s Party Chairman Bilawal Bhutto and Pakistan Muslim League- Nawaz leader Ahsan Iqbal were addressing media after the session.
JUI-F chief said the meeting expressed firm support for 4 points agenda of joint opposition. He said rule of law and constitution would be ensured and all institutions have to remain in their limits.
Fazl-ur-Rehman said the struggle of opposition would continue till the agenda is completed. He said PTI foreign funding case should be heard and local governments must be restored.
Fazl said statements of ministers have made CPEC controversial and a separate CPEC authority is need of the hour.
He said that the government should take up the Quran-burning incident with the government of Norway.
PPP chairman Bilawal Bhutto Zardari said helath condition of Asif Zardari is not good and government is not cooperating with us. He said it is against the constitution that cases of Sindh are being heard at Rawalpindi, adding that we hope Supreme Court would hear our case soon.
Bilawal said PPP demands for new elections and ready for it.
Talking on the occasion PML-N leader Ahsan Iqbal said parliament is locked and government is being run through ordinances. He said a very important appointment was made controversial. He said it is inevitable that an elected government must come instead of a selected one.