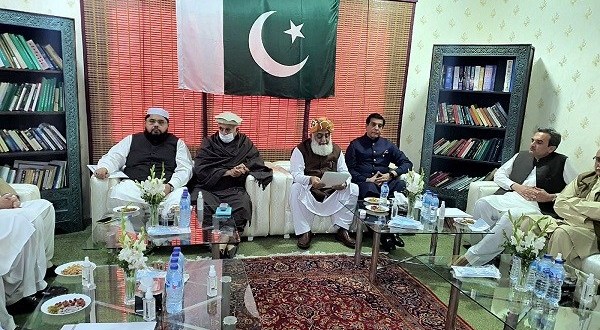 PDM Head and Jamiat Ulema Islam-Fazl chief Maulana Fazlur Rehman has said that naming individuals of an institution doesn’t constitute a crime. He said this while speaking to the media after a meeting of the Pakistan Democratic Alliance in Islamabad. Former premier Nawaz Sharif and Asif Ali Zardari attended it through a video link, Khyber News reported. The meeting once again condemned the arrest of Maryam Nawaz and Captain (retired) Safdar as well as the abduction of Sindh inspector general in Karachi, he said.

The JUI-F chief said the forum expressed concerns over delay in the report of an inquiry announced by Army Chief General Qamar Javed Bajwa. He said the report was to be submitted in 10 days, but it has yet to be presented even after three weeks. Fazl said that all political parties in the PDM agreed on a covenant for the restoration of a true constitutional system in the country. The PDM steering committee will soon meet to finalize its points, he added.

In response to a question about the army and Inter-Services Intelligence chiefs, the JUI-F leader said they respect the institutions but if the names of president and prime minister can be mentioned, then why can’t an individual of an institution be named. “There is no crime in it,” he said. The meeting also held a discussion on Nawaz’s narrative. Pakistan Muslim League-Nawaz’s Shahid Khaqan Abbasi inquired what other way did the PDM have than to approve of Nawaz’s narrative, according to reports.

Pakistan Peoples Party’s Raja Pervez Ashraf said if individuals were to be named in rallies, then it should be formally decided at a PDM meeting. Ex-president Zardari said his party would stand by whatever decision was made by the PDM. Fazl urged the participants to rise above the narrative of their parties and adopt a mutual approach.