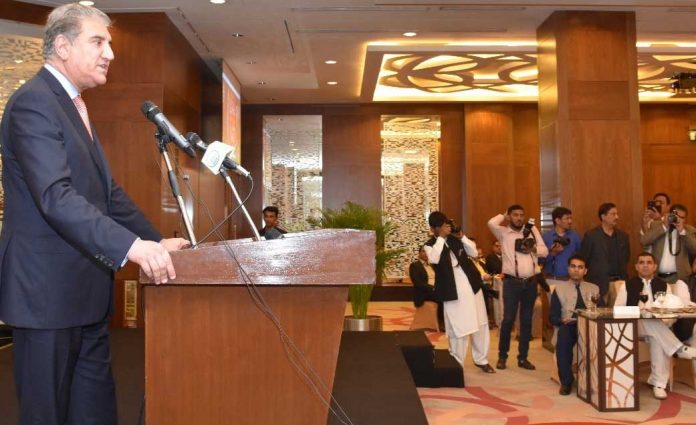 KUWAIT: Pakistan and Kuwait have agreed to transform their bilateral ties into a comprehensive economic partnership.
This was stated by Foreign Minister Shah Mehmood Qureshi while addressing a news conference in Kuwait.
He said the understanding reached during his meetings with Emir of Kuwait Sheikh Sabah Al-Ahmad Al-Jaber Al-Sabah and other senior Kuwaiti leader.
The Foreign Minister said he highlighted problems of the Pakistani community in Kuwait regarding visa restrictions.
He said Pakistan Ambassador will hold a meeting with Kuwaiti authorities to sort out this issue at the earliest.
He said Kuwait has expressed the resolve to continue supporting Pakistan on regional and international fora on matters of common interest.
Shah Mehmood Qureshi said the Kuwaiti leadership also reiterated to support Pakistan’s stance on Kashmir.
Meanwhile, addressing Pakistani Community in Kuwait, Foreign Minister said Overseas Pakistanis are playing pivotal role to get Pakistan stand on its own foot.
He said government of Pakistan is in contact with Kuwaiti government to resolve problems being faced by Pakistanis in that country.
He said Pakistan strongly supports peace in Afghanistan as it is very imperative for development in the region.
The Foreign Minister said Pakistan will befittingly respond to any misadventure against the motherland.
He said Pakistan has rendered unprecedented sacrifices in war-on-terror which are being appreciated and acknowledge by international community.