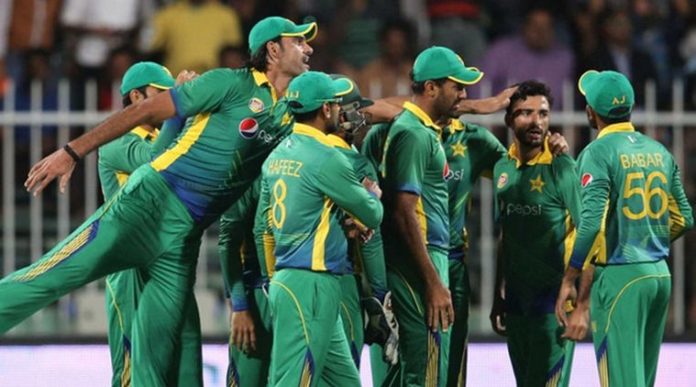 SHARJAH: Pakistan thrashed West Indies by 111 runs in the first ODI of the three-match series at Sharjah Cricket Stadium, Sharjah.
West Indies skipper won the toss and elected to bowl first against Pakistan. They got a moment of joy earlier, picking up skipper Azhar Ali on the very first bowl of the match.
Pakistan struck back with the brilliant batting by Sharjil Khan (54) and young Babar Azam (120) and put up a big total.
Azam, who took a slow start to his innings, went to take on West Indian bowlers in the last part of the innings, completing his maiden ODI ton.
He went on to score a brilliant 120 off 131 balls with 4 gigantic sixes and classical boundaries.
Sarfraz gave him required support with his 35 off 41 balls. The pair added valuable 99 runs partnership in 17.2 over with an average of 5.71 runs per over.
Earlier, Sharjil played a brief but glorious knock of 54 runs 43 balls with 6 fours and 3 sixes. He added a valuable 82-run stand with Babar Azam for the second wicket after Azhar Ali was gone on the first ball of the innings.
Pakistan were 260/6 in 44.3 overs when bad light stopped play. Match was limited to 49 overs due to halt.
The match resumed after fifty minutes of halt that was enough to break the innings momentum and Pakistan, resultantly lost two back-to-back wickets in the next over after resumption.
Nawaz showed a little resistant, but he too couldn’t finish the job and departed for 19 runs in final over. Pakistan could only manage to put 284/9 in 49 overs, what could be over a 300-run target.
West Indies took a good start, playing Pakistan attack with lot of care. But, Amir broke into West Indies’ batting line up, and that was the crack was required.
Windies kept losing wickets at a regular interval and were bundled out for 175.
Nawaz was the pick of the bowler, taking 4 wickets for 42 runs in his 10. Hasan Ali was also on target, taking 3 wickets for 14 runs.
Brilliant Babar Azam was picked Man of the Match for his remarkable innings of 120 off 131 balls.