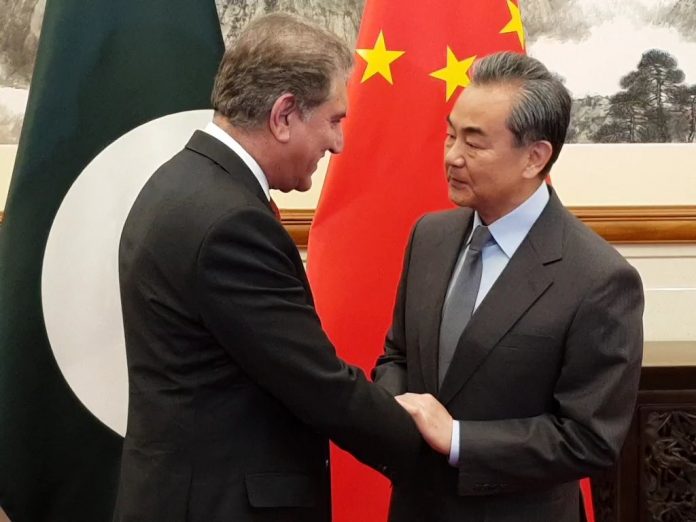 BEIJING: Foreign Minister Shah Mehmood Qureshi on Tuesday stressed that as neighboring countries and friends of Afghanistan, Pakistan and China strongly support the Afghan-led and Afghan-owned peace process.
Qureshi expressed these views during his meeting with Chinese State Councillor and Foreign Minister Wang Yi in Beijing, China, on the third leg of his four-nation visit as part of the government’s policy of outreach in the neighborhood.
The two sides had an in-depth exchange of views on the entire spectrum of bilateral relations and regional matters including the situation in Afghanistan, a statement from the Foreign Office said.
Foreign Minister Qureshi reiterated that the ‘All-Weather Strategic Cooperative Partnership’ between Pakistan and China is deeply rooted in mutual trust and respect.
While discussing the evolving political dynamics in Afghanistan, the two sides underscored commonality of views on the matter.
He also appreciated China’s important role in furtherance of peace and development in Afghanistan, particularly through China-Afghanistan-Pakistan trilateral mechanism.
Expressing satisfaction at the strong bilateral partnership, Qureshi highlighted that the China-Pakistan Economic Corridor (CPEC) has added an important dimension to the bilateral ties. He also noted the important progress made on CPEC during the eighth meeting of Joint Coordination Committee (JCC) held in Beijing on December 20.
State Councillor and Foreign Minister Wang Yi appreciated Pakistan for its efforts for peace and reconciliation in Afghanistan.
He said China attaches paramount importance to its relations with Pakistan and underlined that time-tested partnership between the two countries is based on mutual respect, trust and strong bonds of friendship.
Both leaders agreed that the highly successful visit of Prime Minister Imran Khan set the tone for further expansion of the time-tested friendship between Pakistan and China.
Qureshi will next visit Russia before returning to Pakistan on December 26.
On Monday, the foreign minister met his Iranian counterpart Mohammad Javad Zarif in Tehran, where he reiterated Pakistan’s desire to have friendly relations with all neighbors.
He also met Afghan President Ashraf Ghani at the Presidential Palace in Kabul, and held delegation-level talks with his Afghan counterpart Salahuddin Rabbani.
A press release issued by the Foreign Office ahead of the foreign minister’s departure stated that he would discuss Pakistan’s bilateral relations with senior leadership of the four countries, to strengthen cooperation in various areas.
The visit is part of promoting various initiatives and ideas for regional cooperation, especially in promoting economic and people-to-people linkages.