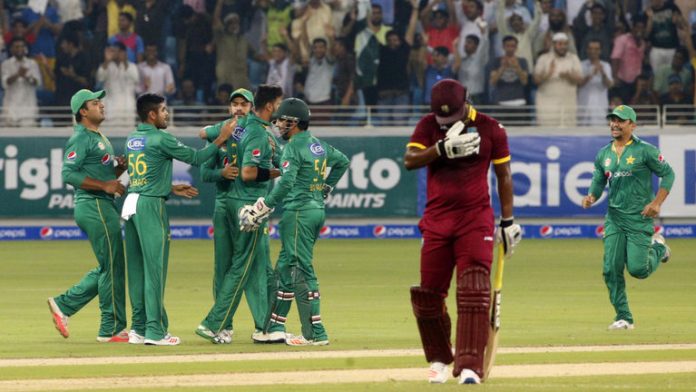 DUBAI: Pakistan captain Sarfraz Ahmed won the toss and chose to bowl in their third Twenty20 international against West Indies at Sheikh Zayed Cricket Stadium in Dubai.
Sarfraz says: “We’ll bowl first today. Looks like a good pitch and also I think the dew factor will be there. We’ve not done a 3-0 before, so we are very eager. We’re all happy and confident.”
Brathwaite says: “Looks a nice track. Will assess the first 3-4 overs and then see how it goes. Looking for a better capitalization of the powerplay and then setting it up for guys later on. We know where we fell short and we know what we have to do. Just the matter of trusting the guys. Have a lot of pride to play for. There’s a sense of anticipation in the dressing room to right the wrongs. Badree misses out with a sore body, Kesrik Williams comes in. Chadvik Walton misses out for Lewis.”
Teams:
Pakistan
Khalid Latif, Sharjeel Khan, Babar Azam, Shoaib Malik, Umar Akmal, Sarfraz Ahmed (capt/wk), Mohammad Nawaz, Imad Wasim, Sohail Tanvir, Mohammad Amir, Rumman Raees
West Indies
Johnson Charles, Andre Fletcher (wk), Marlon Samuels, Chadwick Walton, Dwayne Bravo, Kieron Pollard, Nicholas Pooran, Carlos Brathwaite (capt), Sunil Narine, Jerome Taylor, Kesrick Williams.