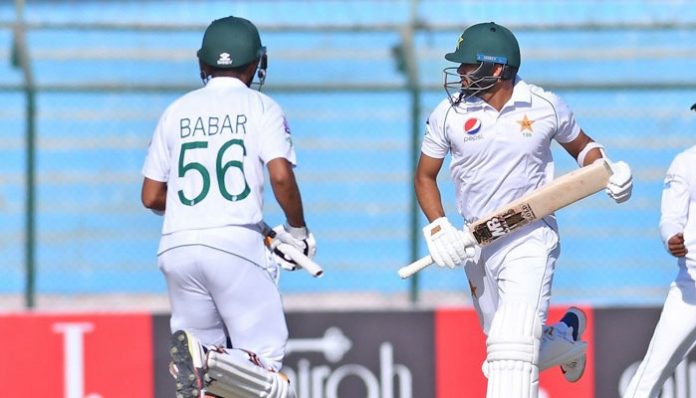 KARACHI: Pakistan – after setting a record in its Test history that four of its top-order batsmen have struck back-to-back centuries in the second and final test in Karachi – declared their second innings at 555 runs for the loss of three wickets. Now, Sri Lanka need 476 runs to win the match.
Today, skipper Azhar Ali struck a hundred, and was at 118 runs from 157 balls with 13 impressive boundaries until Sri Lankan wicketkeeper Niroshan Dickwella made a successful stump-out off spinner Lasith Embuldeniya.
Meanwhile, Babar Azam also scored a century, and was not out at lunch. Azam struck 7 fours and a six to achieve 100 runs from 131 balls.
Azam took a sharp single in the last over before lunch to complete his hundred in 164 minutes, his third in the last four Tests. He has so far hit seven boundaries and a six.
Pakistani wicketkeeper Mohammad Rizwan was supporting Azam to build fourth wicket partnership, and was at 21 runs from 19 balls and 2 fours.
Mohammad Rizwan was not out 21 with Pakistan leading by 475 with seven wickets in hand and five sessions to press for a 1-0 series win after the first Test ended in a draw due to bad weather in Rawalpindi.
Earlier, when Pakistan resumed at 395-2 Azhar smashed three boundaries off pace bowler Vishwa Fernando and then took two runs to complete his first century in 12 months.
Azhar added 148 for the third wicket with Azam as Sri Lankan bowlers toiled on a National stadium pitch which has eased out for batting.
These batsmen in their impressive batting form have taken Pakistan towards a comprehensive lead of 475 runs against Sri Lanka on Sunday.
Hosts still have seven wickets in hand, but it seems that they would declare the innings, for giving a chance to Sri Lanka and securing the win on the final day (tomorrow). The play currently favours Pakistan as they are at good position to put pressure on Sri Lanka with massive target to achieve.
Yesterday, Pakistan openers Abid Ali and Shan Masood smashed hundreds and forged a 278-run stand to flatten Sri Lanka.
Bundled out for a paltry 191 in the first innings, Pakistan finished day three on 395-2, with a commanding lead of 315 runs, after a vastly improved batting display at Karachi’s National Stadium.
Abid, followed his century on debut in the drawn Rawalpindi test with a career-best 174, which included 21 boundaries and a six.
Shan’s 135 was also his highest test score, studded with three sixes and seven boundaries.
Skipper Azhar Ali (57) and Babar Azam (22) returned on Sunday hoping to bat Sri Lanka out of the contest and inch closer to a series victory.
On a pitch offering little to the bowlers, Abid and Shan batted fluently to deny the Sri Lankans in the morning session when they scored at a four-and-half per over rate.
Abid took two off left-arm spinner Lasith Embuldeniya to bring up his century and it did not take long before Shan completed his hundred.
The last time both Pakistan openers smashed centuries in the same innings was in 2001 when Saeed Anwar and Taufeeq Umar got hundreds in a Multan test against Bangladesh.
Lahiru Kumara finally separated the duo when Shan attempted a pull shot and the top-edge found Oshada Fernando at deep square leg.
It was the end of Pakistan’s highest second-innings stand for any wicket.
Abid was looking good for a double century but he perished lbw trying to flick Kumara.
The two-match series, part of the World Test Championship, marks Pakistan’s first tests on home soil since the 2009 militant attack on Sri Lanka’s team bus in Lahore. …Agencies