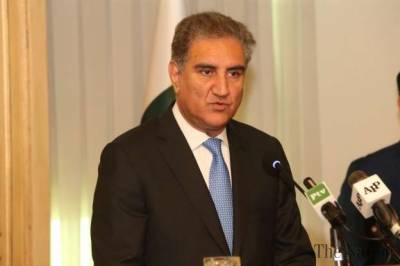 MUNICH: Foreign Minister Makhdoom Shah Mehmood Qureshi has stressed the importance of a broad-based and structured relationship between Pakistan and the United States for promoting the two countries’ shared interests.
He expressed these views while talking to a bipartisan group of US lawmakers led by Republican Senator Lindsey Graham on the sidelines of the Munich Security Conference in Germany.
He observed that Pakistan looks forward to enhancing cooperation with the United States in trade, energy and business sectors.
The Foreign Minister said his government is pursuing an ambitious domestic agenda of reform and people-centric development, which is contingent on peace and stability in Pakistan’s neighborhood.
About Afghanistan, Shah Mehmood Qureshi said Pakistan wants to see return of peace to Afghanistan and added that there is no military solution to the Afghan conflict.
The Foreign Minister welcomed recent progress in the Afghan peace process, but stressed that a final settlement would remain elusive without the ownership of all Afghan parties as well as the broader region.
Senator Graham appreciated Pakistan’s support for peace in Afghanistan, noting that the progress made in last month’s Doha talks would not have been possible without Pakistan’s assistance.
Recalling his recent visit to Pakistan, the Senator said that he had been impressed by the successes Pakistan achieved in its fight against terrorism.
He endorsed the Shah Mehmood Qureshi’s desire for a strategic and comprehensive partnership between Pakistan and the United States and stressed upon establishing a Free Trade Agreement between the two countries.
Meanwhile, addressing a Panel Discussion on “Update on Afghanistan” during the Munich Security Conference, the Foreign Minister said Pakistan has sincerely responded to the US request for facilitating the peace and reconciliation process in Afghanistan that led to direct US-Taliban talks in Abu Dhabi and Doha.
He said Pakistan desires to see a genuine and inclusive peace and reconciliation process with full Afghan ownership.
Shah Mehmood Qureshi briefed the audience about Prime Minister Imran Khan’s long-standing vision for a peaceful settlement to Afghan conflict and opposition to finding a military solution.
The Foreign Minister said no country other than Pakistan would benefit more from peace in Afghanistan, because after Afghanistan no other country has suffered as much as Pakistan.