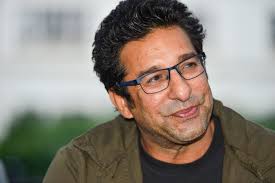 NOTTINGHAM: Former captain Wasim Akram has advised Pakistan side to play attacking and fearless cricket against the West Indies.
In an interview, Wasim Akram said the venue has always offered high-scoring matches and Pakistan will have to display flamboyant cricket against Windies.
“West Indies is a very dangerous side. I want Pakistan to play bravely, with a big heart and play on front foot. See how Root played today after losing first wicket early. You don’t need to slog but you must play proper cricketing shots. We need someone to bat like him,” Akram said.
The former captain and member of victorious 1992 World Cup squad said Fakhar Zaman will have an important role to play in a match, which is likely to be a high-scoring encounter.
“Fakhar is an attacking player. He has been there for long and now people know how to bowl him. It is now up to Fakhar how to counter opposition’s strategy on him as bowlers are not going to give him room. Opening pair has to fire,” he said.
Replying to a question, Akram said the 12-member squad announced by Pakistan looked good and gave Sarfaraz some good bowling options. He added that he would include Asif Ali in the final XI as Pakistan needs a proper power hitter in the middle order.
“The 12 announced for the match against West Indies looks good. Pakistan is rightly going with five bowlers as we were strolling with bowling options recently. The ground looks very high scoring with par score of 370 and Pakistan must score this much runs,” the former fast bowler said.
“Pakistan needs a power hitter and Asif Ali is that one. I will have him in my XI. Saffy is not a power hitter, he can add quick runs but we need a power hitter and there’s no doubt that Asif deserves a place,” he said.
Akram further said that results of last ten games shouldn’t have any impact on Pakistan’s progress in the World Cup, however, Pakistan will have to work really hard to finish among top four teams in the cricket’s pinnacle.
“Done is done, we were beaten, but that’s past. We had an inexperienced squad against Australia and acclimatizing opportunity against England, now there’s no excuse for them. I hope the extravaganza of World Cup would motivate the players,” he said.
“All the teams are tough, Pakistan don’t look too strong. They’ll really have to work hard to be in the semi-finals,” the former captain concluded.