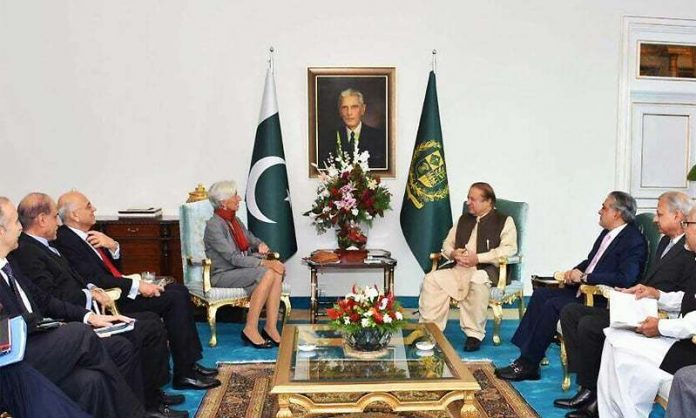 ISLAMABAD: Pakistan was praised Monday by IMF chief Christine Lagarde for emerging from an economic crisis and stabilising its economy, after the country completed its bailout programme.
The IMF released the last instalment of a $6.6 billion three-year economic bailout package to Pakistan last month.
Lagarde, on her first visit to Pakistan Monday, congratulated Prime Minister Nawaz Sharif “on successfully completing the IMF programme which has helped Pakistan restore its macroeconomic stability”, according to a statement from Sharif s office.
“It is a fantastic step in your journey that you have achieved a better and solid economic position in a brief period of two years,” Lagarde said, according to the statement.
Lagarde added the completion of IMF programme reflected “very positively” on Pakistan and the country is “certainly out of economic crisis”.
Lagarde noted that economic growth has gradually increased, the fiscal deficit has reduced while inflation has continuously declined in Pakistan.
“She also appreciated the country s strengthened social safety nets and tax policy and administration reforms,” the statement said.
In an article published in Pakistan s daily The News, Lagarde wrote that the country had embarked on an important transformation to join the ranks of emerging market economies.
“Its three-year economic reform programme, which the IMF supported, has delivered significant gains,” she wrote.
“The economy is now more resilient, and further steps have been set in motion to support higher, private sector-led, and inclusive growth.” …Agencies