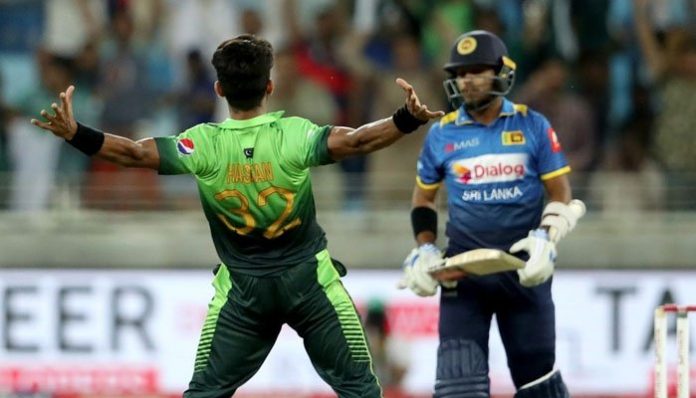 DUBAI: Pakistani bowlers tore through the Sri Lankan batting order, taking the team to an 83-run victory in the first ODI at the Dubai International Cricket Stadium on Friday.
Hasan Ali and Rumman Raees spearheaded the Pakistani assault with their impressive performances, taking 3-36 and 3-49 respectively to restrict Sri Lanka to 209 in 50 overs.
Pakistan scored 292 for six in their 50 overs, led by a brilliant 103 by Babar Azam and helped by a quick-fire 81 off 61 by Shoaib Malik.
Earlier, Babar Azam returned to form with a brilliant century, while Shoaib Malik hit a rapid fifty, to propel Pakistan to 292-6 in the first one-day international against Sri Lanka in Dubai on Friday.
Azam finished with 103 from 131 deliveries for his sixth ODI hundred, as Malik smashed a 61-ball 81 as the pair added 139 for the fourth wicket after Sri Lanka had won the toss and opted to bowl first.
Malik joined Azam at 124-3 and smashed five fours and two towering sixes before holing out at deep midwicket off the last ball of the 47th over.
Azam completed his hundred off 128 balls in the next over with a single, but three runs later miscued a drive off paceman Suranga Lakmal, who finished with 2-47 from his ten overs.
Azam managed a poor 38 runs in the preceding 2-0 Test-series defeat but batted with guts to prove his credentials as a limited-overs batsman.
Pakistan got off to a poor start when opener Ahmed Shehzad fell for a 12-ball duck, caught off Lahiru Gamage in the fourth over of the innings.
Fakhar Zaman and Azam took the total to 75 before Akila Dananjaya bowled the opener with a googly.
The left-handed Zaman played well during his 45-ball 42 though, hitting four fours and a six.
Pakistan are counting on a change in format and players to overcome a resurgent Sri Lanka in the five-match one-day series, after facing a 2-0 upset in the preceding Test series.
But they are hoping to change their fortunes and carry the limited over form which helped them win the eight-nation Champions Trophy held in England in June this year.
They only have skipper Sarfraz Ahmed, batsmen Haris Sohail and Babar Azam and fast bowler Hasan Ali from the Test series, while experienced all-rounder Mohammad Hafeez and opener Ahmed Shahzad amongst the 11 who joined the squad.
Sarfraz feels the pressure of losing his first Test series but promised a better performance in the limited over matches.
“Obviously, when you have a first Test series as captain, and you lose it, pressure will be there,” said Sarfraz who played a match winning 61 not out against Sri Lanka in the Champions Trophy group match.
“But we will try and get out of that. Our one-day team is balanced and our record is very good. We will have some senior players returning and I hope we´ll play better cricket.”
Pakistan also have a young crop of fast emerging players in opener Fakhar Zaman — who hit a century in the Champions Trophy final against India — leg-spinner Shadab Khan, all-rounders Imad Wasim and Faheem Ashraf, and pacers Rumman Raees, Junaid Khan and Usman Shinwari.
Spearhead Mohammad Amir was ruled out of the series with a shin injury sustained in the second Test in Dubai.
Pakistan´s loss in the Test series was their first in United Arab Emirates in 10 attempts since they were forced to play at a neutral venue amidst security fears sparked after 2009 attacks on the Sri Lankan team bus in Lahore.
But their one-day record in UAE has been abysmal, having lost nine of the 12 series since 2009, only winning twice against Sri Lanka and once against the West Indies.
Sri Lanka have come from wretched one-day form, having lost 16 of their last 21 games, winning four with one no result. That included a 5-0 whitewash against South Africa and India and first-ever series defeat against minnows Zimbabwe.
That defeat against India last month put pressure on skipper Upul Tharanga.
“We lacked consistency. We didn´t bat, bowl or field well. We were outplayed by India. I am disappointed with our batting effort,” said Tharanga whose team failed to reach 250 in any of the matches.
The remaining matches are in Abu Dhabi (16 and 18 October) and Sharjah (October 20 and 23). Three T20 matches will follow the ODIs, two in Abu Dhabi (October 26 and 27) and the last in Lahore (October 29).