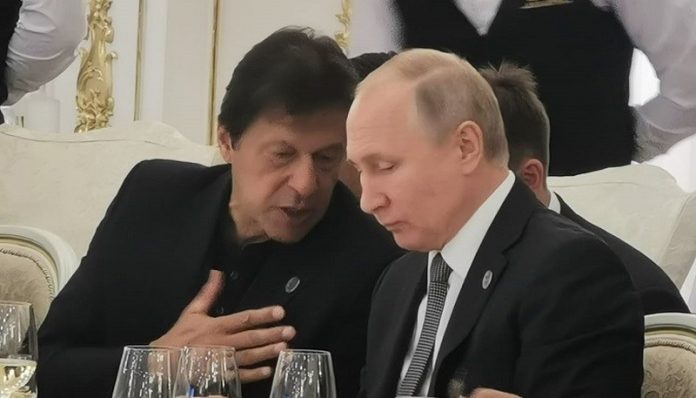 ISLAMABAD: Pakistan and Russia have signed their largest-ever deal worth billions of dollars for expanding trade and business ties, Pakistani officials have announced, according to a report by RT.
Russian Minister of Industry and Trade Denis Manturov is leading a 64-member delegation on an official four-day visit to Pakistan, and the deal includes huge investments in energy, rail and steel industries.
According to the agreement, Russia will provide financial assistance worth $1 billion for the rehabilitation and upgrading of the Pakistan Steel Mills (PSM) project.
Russian Sukhoi Superjet 100 (SSJ-100) planes will be supplied on both wet and dry lease with an option to purchase, according to Pakistani officials. The narrow-bodied aircraft with a dual-class cabin is capable of transporting 100 passengers over regional routes.
The two sides also discussed investments in the much-delayed North-South gas pipeline.
Russian companies are expected to build a gas pipeline from Karachi in the south to Lahore in the north-east to transport imported natural gas to meet the region’s energy demands.
Earlier this year, Russia promised a $14 billion investment in Pakistan’s energy sector, including $2.5 billion for the North-South pipeline project.
A Russian company has developed a project to convert the Muzaffargarh thermal power station to coal and establish a 600-megawatt coal-fired power plant at Jamshoro.
Islamabad, which purchased MI-35 helicopters in 2018, is interested in other Russian hardware as well. The two nations aim to increase bilateral trade which last year stood at $700 million. Pakistan’s exports to Russia reached $150 million while imports from Russia are worth $250 million.
Moscow will also help to construct a railway track from Quetta to Taftan.
Last week, Pakistan and Russia signed an agreement on the settlement of mutual financial claims and commitments on operations of the former Soviet Union, whereby Pakistan repaid a $93.5 million debt to Russia.
“We have removed the problem. Russia will come to Pakistan strongly now,” said a Pakistani government official.