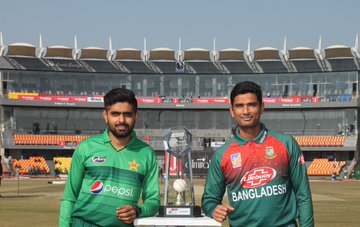 LAHORE: Pakistan are seeking to hold on to the top world ranking and also prove again the country is capable of hosting international cricket when they take on Bangladesh in a Twenty20 series starting Friday.
If the host team lose just one of the three matches scheduled they will slide to second behind England or India in the rankings after holding the top spot since January 2018.
But they also want to show the security situation has improved enough for the team to start regularly hosting home internationals.
Following an attack in 2009 by militants on a convoy ferrying the Sri Lanka team to a fixture in Lahore, Pakistan became a wilderness for the national side who had to play home fixtures in the Middle East. That ended in December when Sri Lanka returned to give Pakistan their first home series in a decade.
The first priority for skipper Babar Azam is to stay top of the world in the shortest international version of the game. “The focus is to continue the number one ranking,” said Babar on Thursday. “We can hang on to that only if we win all three matches, so its a do-or-die situation and we have planned for that,” he told a press conference.
Pakistan s rise started in 2016 under Sarfaraz Ahmed as they won eleven consecutive Twenty20 series — before losing three on the trot.
A poor finish in the 50-over World Cup in England, where they failed to reach the semi-finals, resulted in the sacking of Sarfaraz and head coach Mickey Arthur, to be replaced by Azam and Misbah-ul-Haq respectively.
The team remained in a slump in Australia late last year, losing 2-0 in the Twenty20s and by the same margin in two Tests. Now the selectors have recalled veterans Mohammad Hafeez and Shoaib Malik, but they need all the experience they can get.
Bangladesh, who last toured Pakistan in 2008, are coming off the back of an impressive series in India, where they won one of their three matches. They also have a 2-1 advantage against Pakistan in the last three Twenty20 internationals.
“We have been good,” said Bangladesh skipper Mahmudullah. “We want to do well in Pakistan.” Mahmudullah said security fears had been left behind in Bangladesh. “We feel good in Pakistan… so the focus will be on cricket.”
Squads (from):
Pakistan: Babar Azam (capt), Ahsan Ali, Amad Butt, Iftikhar Ahmed Haris Rauf, Imad Wasim, Khushdil Shah Mohammad Hafeez, Mohammad Hasnain, Mohammad Rizwan, Mohammad Musa, Shadab Khan, Shaheen Afridi, Shoaib Malik, Usman Qadir
Bangladesh: Mahmudullah (capt), Tamim Iqbal, Soumya Sarkar, Mohammad Naim, Najmul Hossain Shanto, Liton Das, Mohammad Mithun, Afif Hossain, Mahedi Hasan, Aminul Islam, Mustafizur Rahman, Shafiul Islam, Al-Amin Hossain, Rubel Hossain, Hasan Mahmud
Umpires (first match only): Ahsan Raza (PAK) and Shozab Raza (PAK
Tv umpire: Ahmed Shahab (PAK)
Match referee: Ranjan Madugalle (SRI)