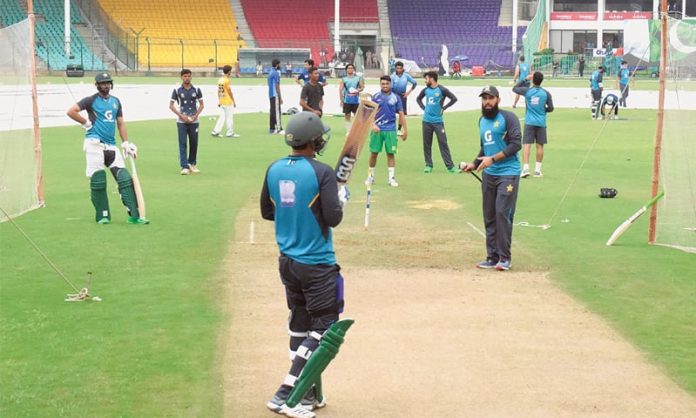 KARACHI: Karachi’s National Stadium will be under spotlight from Thursday as Test cricket returns to the iconic venue, said a press release by the PCB.
Since hosting the first Test between Pakistan and India in 1955, the stadium has staged some of the most riveting red-ball encounters and has earned the reputation of being Pakistan cricket’s fortress because of the national side’s prolific record here.
In 41 matches, Pakistan have come out victorious on 21 occasions and 18 matches have been drawn. The home team has lost two matches at the stadium, one of them being the famous England win in gloom in December 2000.
The historic second Test between Pakistan and Sri Lanka will see the venue host a Test match after February 2009 – also played between the same teams – and Riaz Ahmed, the head curator of the venue, is optimistic that the fans will get to see an intriguing contest.
“The wicket and conditions at the National Stadium provide the right balance between bat and ball,” he said. “The morning sessions earlier in the match provide assistance to the seam bowlers. The pace bowlers come back in the limelight during the evening session with the sea-breeze coming into play.
“The batsmen have the opportunity to pile up runs across all three sessions due to the true bounce in the wicket and fast outfield. The spinners come into play as the match progresses with the pitch offering grip and purchase.”
Over the years, rousing crowds have added to the flavour with cricket crazy Karachiites filling in the stadiums.
The highest team score in an innings at this venue is Pakistan’s 765 for six, which was made in the last match in February 2009. Pakistan batting great Younis Khan, who has the distinguished record of being the country’s only batsman to have more than 10,000 Test runs, has the highest individual score of 313 at the venue, which was made in the same match.
Batting legend Javed Miandad has made the most runs at the National Stadium, accumulating 1,393 runs at an average of 58, while leg-spin maestro Abdul Qadir took the most wickets here with 59 wickets.
It is also the only venue in Pakistan to host a women’s Test when Pakistan women played the West Indies women in a drawn contest in March 2004.
With Pakistan and Sri Lanka – two of the most exciting Test sides – locking horns, the return of Test cricket at the National Stadium promises to be a truly historic occasion with high-octane cricket keeping the fans at the edge of their seats.