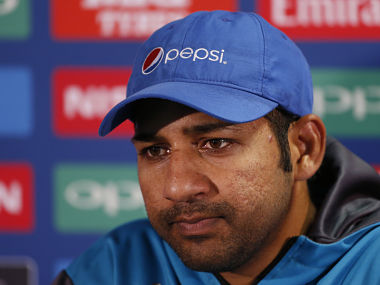 LONDON: Pakistan captain Sarfaraz Ahmed heaped praise on his teammates for the way the team fought back after a horrid start to the World Cup and won the last four games before being eliminated from the race to the semi-finals on NRR difference.
Talking to media at Lord’s after Pakistan’s 94-run thrashing of Bangladesh in their final group game in the World Cup, Sarfaraz admitted the team was paying the price for losing to the West Indies and Australia.
“We were out for a small total against West Indies and then we missed the opportunity of winning from a good position against Australia, I think these two matches spoiled our party,” Sarfaraz said.
The skipper pointed out that the team made a remarkable comeback and kept themselves alive in the competition despite the harsh criticism and abuse.
He said that everyone, including himself, should take responsibility for the outcome and that there was no shame in doing so.
“Cricket is a team game, we all take credit when we do good. So, we all take equal blame when we are unable to give our best.
“We didn’t start off well in the tournament, we should have done better in beginning but in later stages of the tournament, we played really well. Babar was amazing, Shaheen bowled superbly, Imam has done great. Everyone chipped in well.”
The team will learn from its mistakes and do better in future, he added.