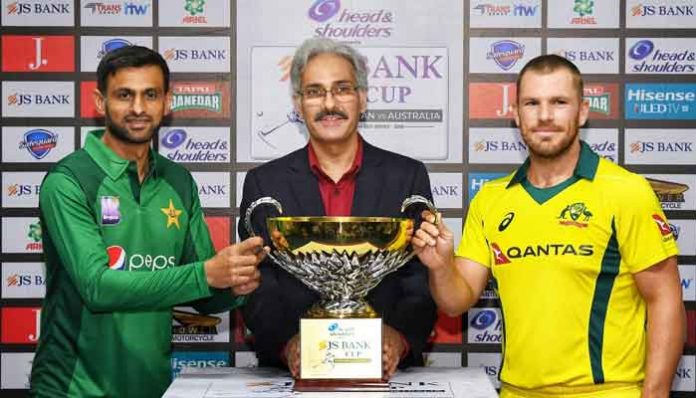 SHARJAH: Australia have now regained the form by thrashing India in 5-match series Pakistan haven’t lost a series in the UAE since 2015 Pakistan are playing without six senior players in the series
Pakistan are set to face one of the cricket giants, Australia, in the five-match One-day International series, which begins today at 4.00 pm in Sharjah.
All the five ODIs will be played in UAE – two each at Dubai and Sharjah and one at Abu Dhabi, from March 22 to 31.
Veteran allrounder Shoaib Malik is leading the home side in the absence of regular captain Sarfraz Ahmed, who is being rested along with five other senior players just to get fresh for the World Cup, the mega cricket event, to be held in England from May 30.
Australia are morally on high scale as they have recently thrashed India in a five-match ODI series in India. They are now taking the inexperienced Pakistan team who are without their six senior cricketers.
The Aussies are being led by an aggressive top-order batsman Aaron Finch, who has played 104 ODIs.
Pakistan has been playing one-day internationals against Australia since the mid-70s and the first ODI series between the two countries was held in 1982-83 when the Aussies toured Pakistan for playing three ODIs.
Pakistan won that series with a convincing margin of 2-0. They again defeated the Aussies in a solitary match at home in 1988-89.
Later, Australia has always been dominating the scene against Pakistan both at home and abroad except the one in 2002, when Pakistan won a three-match series 2-0 in Australia.
Pakistan have so far played eight ODI series against Australia – two three-match series at home, one three-match and two five-match series in Australia and two three-match series in UAE.
In all, 98 one-day internationals have so far been played between the two countries – 32 were won by Pakistan and 62 by Australia as one match was tied and three gave no result.
These figures show the Australians’ dominance over the Pakistanis.
Australia have always been considered the tough contestants as they have so far won 561 ODIs of 927, they played since 1971-72. They lost 323 matches as nine were tied and 34 showed no result. Comparatively, Pakistan have so far played 907 ODIs, out of which, they have won 479 and lost 401 matches with eight tied and 19 NR matches.
Squads
Pakistan: Shan Masood, Imam-ul-Haq, Umar Akmal, Abid Ali, Shoaib Malik (captain), Mohammad Rizwan, Imad Wasim, Faheem Ashraf, Saad Ali, Yasir Shah, Mohammad Amir, Haris Sohail, Usman Shinwari, Junaid Khan, Mohammad Abbas, Mohammad Hasnain.
Australia: Aaron Finch, Shaun Marsh, Usman Khawaja, Glenn Maxwell, Pat Cummins, Alex Cavey, Jason Behrendorff, Nathan Lyon, Nathan Coulter-Nile, Peter Handscomb, Kane Richardson, Jhye Richardson, Adam Zampa, Ashton Turner, Marcus Stoinis.