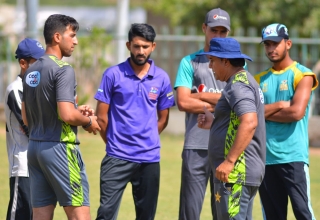 LAHORE: Sri Lanka has called off the Under-19 series against Pakistan which was to start form May 3.
ESPNcricinfo reported on Saturday that the decision has been taken in view of the security situation that has emerged after deadly bombings on Sri Lanka that killed over 250 people last Sunday.
The report said Pakistan cricket authorities have been monitoring the situation and ready to undertake the tour in future.
“The tour has been postponed indefinitely,” an SLC official confirmed to ESPNcricinfo. “It was a decision taken by SLC, as we didn’t want to take any chances,” ESPNcricinfo quoted an official of the Sri Lanka Cricket.
The Pakistan team was due to leave for Sri Lanka on Tuesday.
Last week PCB announced that national U-19 side will tour South Africa for seven 50-over matches as part of their ICC U-19 Cricket World Cup 2020 preparations.
The event will be staged in South Africa from 17 January to 9 February 2020.
The U-19 series against South Africa U-19 will be played in Pietermaritzburg, capital of KwaZulu-Natal, and Durban, the province’s largest city, from 19 June to 7 July.