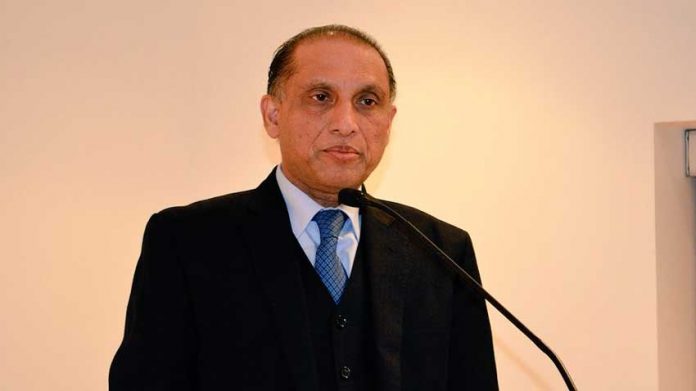 WASHINGTON: Pakistan’s Ambassador to the United States Aizaz Chaudhry has said that Pakistan and the United States need continued engagement with a view to remove misgivings, saying both countries have benefited from collaboration in achieving shared goals.
Ambassador Chaudhry made these remarks while delivering a talk at the University of Chicago about Pakistan-US Relations.
The event was hosted by International House and the Committee of Southern Asian Studies at the University of Chicago.
Ms. Denise M. Jorgens, PhD Director of the International House of the University welcomed the Ambassador and Mr. James H. Nye, Bibliographer for Southern Asia, moderated the event.
Ambassador Chaudhry said that though there were some misperceptions on both sides but disengagement has never been a solution of issues in history.
He stressed the need for more and more dialogue between the two countries with a view to remove misgivings.
Apprising the audience about history of Pakistan-US relations, he said that Pakistan and the United States have enjoyed an exceptional relationship for the last seven decades.
While talking about current state of relations between the two countries, the Ambassador said the relations with the US were very important for Pakistan and this realization was prevalent across all segments of Pakistani polity.
He added that in our regular interactions, Pakistan had been impressing upon its American interlocutors that both countries need to work together to resolve all issues. “This required continued engagement at all levels. The two sides could work together to achieve the shared objective of peace and stability in Afghanistan.”
Ambassador Chaudhry’s talk was followed by lot of questions from audience about current state of relations between Pakistan and United States.
Established in 1890, the University of Chicago (also known as UChicago) is a private research university with 15,365 students.
It’s currently ranked 10th in the world according to the QS World University Rankings, making it the fifth highest-ranked university in the US.
Ambassador Sahibzada Yaqoob Ali Khan also spoke at the University in the 1970s. – APP