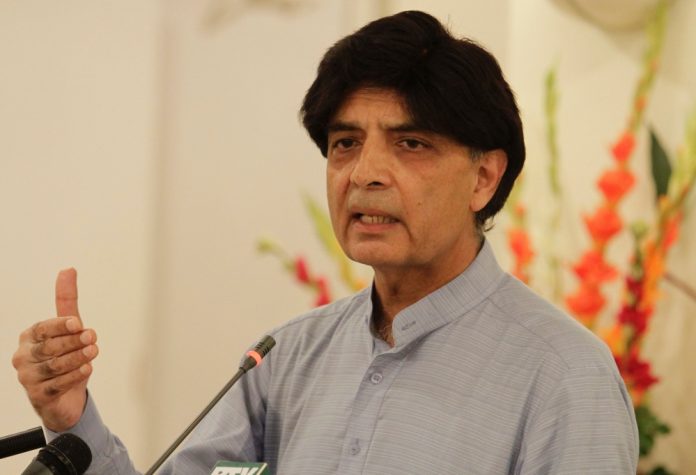 ISLAMABAD: Former Interior Minister Chaudhry Nisar Ali Khan said on Wednesday that amid ongoing Indian state-sponsored terrorism in the Occupied Kashmir, the recent meeting between the National Security Advisor Lt Gen (retd) Naseer Khan Janjua and Indian High Commissioner Ajay Bisaria was ‘unreasoned’.
The meeting between Lt Gen (retd) Naseer Janjua and Bisaria was held on Wednesday, in a press release issued after the meeting it said that the national security advisor conveyed Pakistan’s concerns on the worsening security situation in the occupied Kashmir to the Indian diplomat.
Januja told Bisaria that Pakistan is pursuing the policy of friendly relations with all its neighboring countries including normalcy of relationship with India. Pakistan is committed to resolving all outstanding issues through comprehensive dialogues, he said.
The security adviser expressed serious concerns over ongoing human rights violations in Kashmir valley, and emphasised that the use of force “will lead us nowhere”.
Giving his reaction to the meeting, Nisar said that prior meeting the Indian authorities, the government should think what message it would give to the Kashmiri people.
He said that when the Pakistani diplomats in India are facing harassment, here in Islamabad, people are calling for strengthening their friendships with the Indian diplomats.
The disgruntled Pakistan Muslim League-Nawaz leader said that the United Nations have taken notice of the ongoing crisis in Kashmir; Amnesty International has called the Indian security forces operations as an open state-sponsored terrorism.
“A perception is being created that Pakistan and India are coming closer,” he said. “The Kashmiris are being buried with Pakistani flags and here we are meeting with their killers as if everything is all well.”